Gun Owners of America (GOA) and Gun Owners Foundation (GOF) on Tuesday submitted comments to the Department of Alcohol, Tobacco, Firearms and Explosives (ATF) on the proposed bump stock ban.

Infringing Upon the Second Amendment

According to Tim Macy, the Chairman of Gun Owners of America, banning bump stocks is a plain infringement upon Americans’ Second Amendment rights:

These regulations will infringe the Second Amendment rights of Americans — the very same Americans who elected the current President based on his promises that he would defend those rights. Respectfully, we want to emphasize there is no legal authority to ban so-called “bump stocks” or “bump-fire stocks” by decree. An executive ban of bump stocks, by classifying them as machineguns [sic], would utterly contradict the plain text of the federal statute regulating machineguns [sic], even as the Obama administration repeatedly conceded

Neither the ATF nor the Department of Justice has ever believed there is executive authority to ban bump stocks. I implore this administration to respect the plain meaning of the Constitution, which states that the people’s right to keep and bear arms “shall not be infringed.” 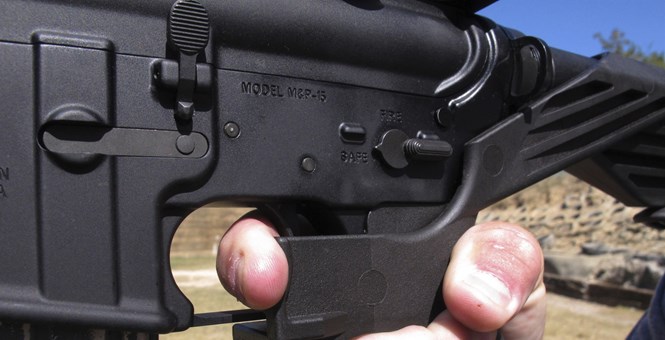 Gun Owners of America also argues that banning bump stocks is a slippery slope. What else would Congress — and the President want to ban down the road? Having a bump stock ban in place gives future administrations precedent for future bans of any kind:

If this administration outlaws bump stocks, without regard for the limitations on ATF authority under federal law, it will put into place a slippery slope for future, anti-gun presidents. If ATF chooses to ignore the statutory definition of a machinegun [sic], and instead creates a new definition based on anything that “increases the rate of fire” of a semi-automatic firearm, then far more is at risk than mere bump stocks.

These regulations are proposing a radical change — as they effectively define a gun as a machinegun [sic] even if the trigger resets for every round that is fired, so long as the finger only pulls the trigger once. The regulations state on p. 13457 of the Federal Register from March 29, that the term “automatically” is being amended to include a “mechanism that allows the firing of So while bump stock devices will now be treated as machineguns under these regulations, these regs also threaten to do the same to AR-15s or other semi-automatic rifles, particularly in the next anti-gun administration.

There is no doubt that a future administration could use this regulation to ban AR15s and other semi-automatic rifles. In the past, one had to fundamentally change the firing mechanism of a semi-automatic firearm to convert it into a fully automatic firearm. But now, according to these regulations, a bump stock is a machinegun [sic] — and it can “readily restore” a semi-auto into a machinegun [sic] , simply because the gun owner can effectively fire the weapon continuously with a “single pull” of the trigger. According to these proposed regulations, this satisfies the legal definition of a rifle that is classified as a machinegun [sic] (26 USC 5845(b)).

Gun Owners Foundation explains how the slippery slope would impact firearms accessories in the future:

Federal law defines a machinegun [sic] as “any weapon which shoots, is designed to shoot, or can be readily restored to shoot, automatically more than one shot, without manual reloading, by a single function of the trigger.” 26 U.S.C. § 5845(b) (emphasis added). Given this clear statutory definition, ATF has never in five decades seen the need to promulgate regulations to elaborate or further explain this definition

Under the statute, a firearm must also fire “automatically” in order to be a machinegun [sic]. The word “automatically,” according to the National Firearms Act, means “more than one shot without manual reloading by a single function of the trigger.” In other words, with one function of the trigger, an automatic firearm will continue to fire until the trigger is released, ammunition is depleted, or the firearm malfunctions. Indeed, that is how a machinegun [sic] works. By applying a one-time, continual squeeze to the trigger, a machinegun [sic] will continue to fire, recoil, reset, and fire again. So long as the trigger is depressed, that continual operation is “automatic.” Not so with a bump fire stock — a bump stock-equipped firearm still fires one round with one function of the trigger. As ATF admits, “[t]he stock has no automatically functioning mechanical parts or springs and performs no automatic mechanical function when installed.” ATF June 7, 2010 letter (emphasis added). When a shooter is assisted by a bump fire stock — he simultaneously must apply opposing constant forward pressure and constant rearward pressure, in order to have his finger “pull” the trigger. However, mechanically and functionally the firearm is still a semi-automatic firearm, firing one round with one function of the trigger. There’s nothing “automatic” about that.

Gun Owners Foundation makes an interesting argument: that bump stocks can’t rapidly fire by simply attaching them to the firearm. Instead, GOF argues that bump fire is a skilled technique that takes practice to learn:

The word “automatic” means “a device or process[] working by itself with little or no direct human control.” Yet, as ATF correctly notes, for a bump fire stock to function properly, the shooter must maintain simultaneous “constant forward pressure” coupled “with constant rearward pressure” on the firearm (much like when shooting a bow and arrow), the proper combination of which allows “the recoil energy of the firearm” to rapidly “bump” the trigger against the trigger finger. NPRM at 13443. Without this critical element of human control, the rifle to which the bump stock is attached would, at best, fire a single round (see ATF letter of April 6, 2017 ), or may experience a malfunction. Thus, it is only with human input and intervention — applying simultaneous opposing forces — that the bump stock can function for rapid semiautomatic fire.

In other words, the shooter’s arms act as a human compression spring (pushing forwards while pulling rearwards). With an installed bump stock, the recoil energy of the firearm then “compresses” or “loads” the human spring (causing the trigger finger to momentarily release the trigger), until the human spring “rebounds” (causing the trigger finger to again contact the trigger). This is why a bump stock is helpful — but not at all necessary — for bump firing. The human being is the integral part of the bump fire system, the bump stock only makes it easier.

The mechanical differences between a genuine automatic firearm such as an M16, and a bump fired semiautomatic rifle such as an AR-15, are plain to see. An M16, for example, harnesses only the recoil energy of the firearm (the reciprocating bolt carrier group) to continually reset the trigger and release the hammer, firing additional rounds until the trigger is released. A bump fire stock, on the other hand, must also harness human energy — precise and opposing forces — in order to function as intended.

What’s more, not only must a shooter apply opposing forces to the firearm, he must apply a precise amount of force. ATF’s April 2, 2012 letter called this an “appropriate amount” of force, ATF’s June 26, 2008 letter called it “intermediate pressure,” and ATF’s April 6, 2017 letter twice noted that it was critical that “sufficient forward pressure” be applied. In other words, using a bump fire stock requires practice and skill to accomplish rapid, semiautomatic bump fire. To be sure, it may not require a large amount of practice or a high level of skill, but of course that is the entire purpose of the bump stock — to make a somewhat difficult technique somewhat easier. Either way, the point is that nothing about the operation of a bump stock is automatic, but rather use of a bump stock is a learned technique.

Both groups also reminded the ATF of one important fact: the ATF themselves noted what kind of human interaction is needed in order for the bump stock to adequately work. In a sense, the ATF is admitting that they know how the firearms accessory works but they still are looking at classifying it as a machine gun.

One of the greatest concerns GOA has about the proposed bump stock ban is the impact it will have on law-abiding gun owners. The proposed ban has no plan on grandfathering bump stocks, meaning those who currently own them would instantly be labeled a criminal.

How many bump stocks are there? 300,000? 500,000? No one really knows. But how many do you think are going to turn in their bump stocks before this regulation goes into effect? Make no mistake about it: Banning firearms without a grandfather clause is something that neither Lyndon Johnson nor Bill Clinton nor Barack Obama ever did. Clinton’s semi-automatic ban — as odious as it was — didn’t criminalize pre-existing semi-automatic owners.