Wednesday’s hearings before the New Hampshire House on Gun Confiscation Orders (sugar-coated as “red flag laws”) were, if nothing else, a case study in New York-style bullying and intimidation. 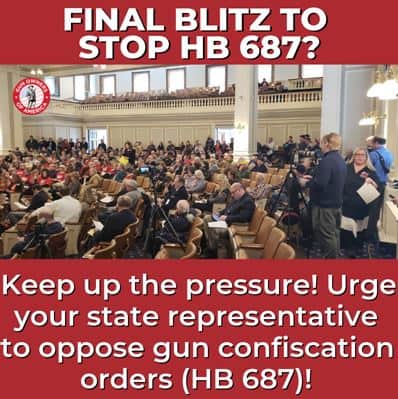 And their purpose was to turn New Hampshire into the nightmare they already achieved in New York City, Chicago, Baltimore, and Los Angeles.

Make no mistake:  The Gun Confiscation Orders would strip gun owners of their constitutional rights, based on a simple telephone call to a pliant judge.  And the first thing the New Hampshire gun owner would learn of the proceedings is when a SWAT Team arrived at his home in the middle of the night — ready to ransack the home and, if he resists, arrest or kill him.

Think this is an exaggeration?

Consider Gary Willis of Ferndale, Maryland, who was shot to death by police serving a “red flag order” at 5:17 a.m. Willis’ “crime” was to, not surprisingly, go to his door with a gun in his hand.

But, on March 5, New Hampshire gun owners made it clear to the legislature that they were not going to submit to this anti-gun piece of legislation.

Despite the fact that New York billionaire Michael Bloomberg is spending hundreds of millions of dollars to force his anti-gun notions on pro-gun states, pro-gun witnesses outnumbered anti-gun witnesses by a margin of roughly four to one.

Even liberal groups like the American Civil Liberties Union lacerated the unconstitutional aspects of this repressive proposal.

And even a UNH Law School professor, Albert Scherr, ripped the bill to shreds.

Scherr compared confiscating guns for “future crimes” to the dystopian world of the movie Minority Report — where police arrest and murder law-abiding citizens based on crimes they might commit in the future.

Scherr also pointed out that the bill’s search warrant requirements fail to comply with Part 1, Article 19, of the New Hampshire Constitution — because there cannot be “probable cause” that the warrant will produce “evidence of a crime” when NO CRIME HAS OCCURRED.

So we’re reasonably optimistic that we will be able to kill this misbegotten piece of garbage.

But we need one final push to stop this bill, so please urge your state representative above to oppose Gun Confiscation Orders!