We need your help to disband the broken “gun line”…

Earlier today, I testified in favor of SB 141, which abolishes the ineffective “gun line.”

The bill is sponsored by Sen. Bob Giuda, who is joined by Rep. John Burt and five other pro-gun legislators. 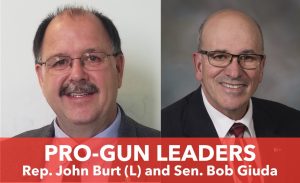 At the hearing today, the committee learned about the massive delays to which gun buyers are being subjected, due to the inefficiencies at the “gun line.”  SB 141 will fix these problems by abolishing the “gun line.”

I expected that the committee would hear from many witnesses and request brevity, so I took the pro-active step of submitting detailed written testimony.  I included many of the comments that GOA members sent in to tell us about the problems they have endured with the “gun line.”  If you have experienced problems yourself, please click here to let us know.

Even though some are claiming that the problems are being fixed, the “fix” appears to be temporary because eight state troopers have been reassigned to the “gun line.”  We doubt that having troopers answer the phones is a permanent solution.  There is simply no need to waste state tax dollars, performing a service that the Federal government will perform for free and will do more efficiently (aka, more quickly).

Jim McLoud, who owns Shooters Outpost, participated in the hearing and told the committee that his business is being harmed and his customers Second Amendment rights are being violated.  And this is all because the state is attempting to perform a job that the federal government will do for free.

After the hearing, he told me that some checks are performed while one of his employees stays on the phone, which means they no longer have to wait for a call back. However,  many calls now just go unanswered, and he is forced to keep redialing until someone at the “gun line” answers the phone.   It looks like we have traded one set of problems for another.

One speaker boldly (most likely correctly) pointed out that at least one group wants to keep the “gun line” so they can use the issue as a fundraising tool.  This is outrageous!

There is still time to contact the Judiciary Committee and urge them to vote SB 141 “ought to pass.”  Please use the above form to do that.

Florida, An Example Of Why Legislative Dictatorships Are Bad