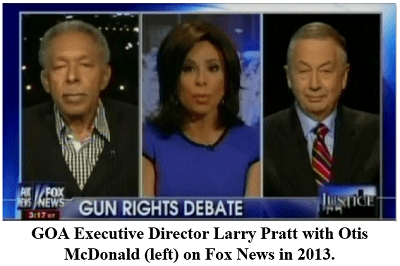 For starters, let me say that we at GOA enjoy the Guns.com site. We have posted several Guns.com articles to our own Facebook page, and we appreciate what you do.

But we were very disappointed to see that you were in large part parroting the talking points of the anti-gun Left, without even contacting us.

We expect this from Media Matters and Rolling Stone. We don’t expect it from a pro-gun journalist who is dedicated to “writing objective, originally-reported and aggregated pieces focused on law enforcement, courts, politics and legislation” as your bio states.

Here are three paragraphs that we found particularly biased:

The GOA recently filed an amicus brief opposing minimum mandatory sentencing for a convicted felon and neo-Nazi caught illegally possessing firearms. The case made its way through the Supreme Court and challenged a specific clause in the Armed Career Criminal Act defining a “violent felony.”

GOA Executive Director Larry Pratt was quick to clarify the case was about illegal search and seizures, not about an individual’s gun rights, but this isn’t the first time the group has been accused of aligning itself with racist groups.

During the 1992 Ruby Ridge stand-off, Pratt railed against the Fourteenth Amendment, granting citizenship to all people born or naturalized in the U.S., including newly freed slaves. Also reportedly present at the three-day event were Aryan Nations members and Klansmen.

In pointing out GOA’s defense of Johnson, you insinuate we were aligning ourselves with Johnson because he was a Neo-Nazi racist. Really? Are you auditioning to replace Piers Morgan on CNN?

And while you did give Mr. Pratt’s response, you took it upon yourself to diminish his answer by saying “this isn’t the first time the group has been accused of aligning itself with racist groups.”

Not that the ridiculous charge even warrants and answer, but the truth is we have NEVER aligned ourselves with racist groups.

As to the Johnson case, you fail to mention that the Supreme Court sided with GOA by an 8-1 vote.

So does that Supreme Court decision make the liberal judges on the Court (Ginsburg, Breyer, Sotomayor and Kagan) closet Neo-Nazi sympathizers because they ruled in favor of Johnson? Or Justice Thomas, for that matter?

Or what about the very-liberal National Association of Criminal Defense Lawyers which took OUR SIDE in submitting an amicus brief in Johnson’s defense. Are they racists too?

GOA defended Johnson — not because of who he is — but because, among other things, he was being charged with a Mandatory Minimum for the mere possession of a rifle.

GOA will fight to overturn unconstitutional laws even when they are used against those who hold views we deplore.

You claim that Mr. Pratt opposes the 14th Amendment because it gave citizenship to “newly freed slaves.”

But you provide NO ATTRIBUTION — because no attribution exists!

You include an embedded link in your sentence — which seems to imply a source for your statement — but when you follow the link which supposedly “justifies” this claim, the article and video there DO NOT EVEN MENTION Mr. Pratt at all.

Again, the reason NO ATTRIBUTION for the quote is cited is because Mr. Pratt never said it all. Not once. Not even anything close to it.

In fact, if you took the time to actually look at his record –which includes several books and hundreds of articles and interviews — you would find the Mr. Pratt’s mission is to defend the Second Amendment rights of ALL Americans.

Take the McDonald v. Chicago decision which was favorably decided by the Supreme Court in 2010. Mr. Pratt vigorously supported Otis McDonald in this case and fought for his right to own a handgun in Chicago.

Not only that, GOA praised the McDonald decision, using arguments that directly appealed to the 14th Amendment as justifying the arming of newly freed slaves — the exact opposite of what you claim Larry said.

Finally, your article says that Mr. Pratt spoke at a conference where there were Aryan Nation and Klansmen leaders in attendance.

This is another Media Matters perpetuated talking point which has been easily rebutted by Roy Innis of Congress on Racial Equality and Aaron Zelman of Jews for the Preservation of Firearms Ownership.

You can read their statements about Mr. Pratt here: www.gunowners.org/nws9603.htm

But at this link (above), you will see what Mr. Pratt has to say about that meeting in Colorado:

I loathe the Aryan Nation and other racist groups with every fiber of my being. I have never belonged to or advocated membership to any group which devalues the integrity of human life. In fact, in response to a question at the meeting I attended in Colorado — which has now been publicly scrutinized in the press — I gave a spirited defense of the Jewish group [Jews for the Preservation of Firearms Ownership]. I heralded Aaron Zelman’s work and told them his group (JPFO) should be strongly supported.

On a professional level, I have shared platforms with many who are my ideological opponents. For instance, last year during the debate over the so-called anti-terrorism bill, I took the stage with the ACLU to denounce that bill…. The press has not, however, elected to label me a closet liberal for that reason.

Jared, I would hope that out of fairness to your friends in the gun community, you would either issue a full retraction or publish this letter on your website as prominently as your original article.