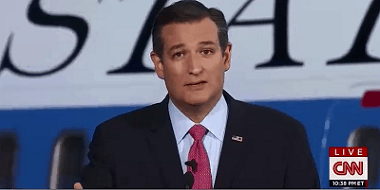 Sen. Ted Cruz defended the Second Amendment rights of all Americans during last night’s presidential debate, and also cited his endorsement by Gun Owners of America.

“And for that reason, I was honored to be endorsed by Gun Owners of America as the strongest supporter of the Second Amendment on this stage today, and I will fight every day to defend the Bill of Rights.”

Gun Owners of America Political Victory Fund endorsed Ted Cruz for President earlier this month based on the Senator’s leadership role fighting gun control, particularly against legislation that was being steam-rolled through Congress after the Sandy Hook shooting.

Tim Macy or other GOA spokesmen are available for comment regarding the Cruz endorsement.

Gun Owners of America is a national grassroots lobbying organization with more than one million members and supporters nationwide.