A Tale of Two Shootings, and Why Gun Control is Killing Us

A Tale of Two Shootings, and Why Gun Control is Killing Us 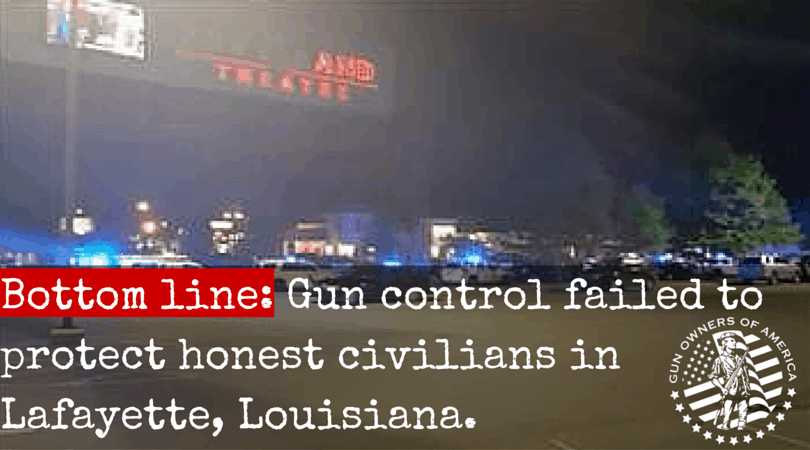 In the wake of Thursday night’s Louisiana shooting, the media has made much ado about the President’s “prediction” that lax gun control laws would lead to more shootings.

But the reality is that strict gun control laws made Thursday night’s shooting at the Lafayette Grand Theater possible.

While facts are still pouring in, here’s what we already know:

1) The perpetrator chose to commit his crime in a gun free zone. The Grand Theater chain does NOT allow concealed firearms on its premises — even by lawfully permitted concealed carry holders. This discourages law-abiding citizens from being able to defend themselves and others.

2) The shooter was a prohibited purchaser because of mental health issues, yet that did not physically prevent him from acquiring firearms.

3) The gunman had been denied a concealed carry permit years ago, yet he still managed to illegally carry a gun.

Contrast Thursday night’s shooting to one that occurred one year ago today.

On July 24, 2014, a nutcase walked into a Darby, Pennsylvania hospital, intent on killing as many people as possible.

But the gunman hadn’t counted on the fact that his #1 intended target — his doctor — had defied the hospital’s “no guns allowed” policy and was carrying a gun of his own.

Dr. Lee Silverman is a lawful permit holder who regularly carries a handgun. Having come under fire, he crouched behind a desk and shot back, hitting the perp three times in the mid-section.

Even though the bad guy was able to murder one person, authorities have credited Dr. Silverman with halting a mass shooting in progress.

Guns in good people’s hands are saving lives. But the President’s approach — which denies guns to law-abiding citizens — prevents potential victims from bringing mass shootings to an abrupt end.

Erich Pratt is the Director of Communications for Gun Owners of America, a grassroots lobby representing more than one million gun owners. GOA is based in Springfield, Virginia, which is just outside of Washington, DC.