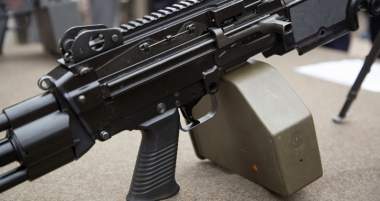 “GOA is correct.  There is nothing in the Second Amendment that excludes ownership of any weapon — machine gun or otherwise —  from within its protection. In fact, the text of the Second Amendment is very clear regarding the government’s ability to qualify this most basic liberty: ‘the right of the people to keep and bear arms, shall not be infringed.’” — The New American, December 27, 2015

A case currently pending before the U.S. Court of Appeals for the Third Circuit could push back against President Obama’s promise to make America safer by disarming civilians. Gun Owners of America (GOA) has filed an amicus brief in this case, U.S. v. Watson.

On its website, GOA provides the following short summary of the relevant issues in Watson:

At issue is the constitutionality of a part of the 1986 McClure-Volkmer legislation, which prohibits the manufacture and possession of machine guns by Americans unless they were registered prior to the date of the Act.

The case in Watson (submitted on December 9, 2015) involves a family trust that had applied to manufacture an M16 and challenged ATF’s eventual denial of that application.Specifically, the brief filed by the GOA challenges the ruling by the district court that held that regulations on the manufacture of machine guns were deemed constitutional in a prior Third Circuit Court opinion, the opinion in U.S. v. Marzzarella.

Dicta in the Marzzarella decision claimed that the U.S. Supreme Court had likewise held in favor of the constitutionality of prohibitions on machine guns.

The Supreme Court has never issued such a ruling. In fact, the decision in the case of District of Columbia v. Heller (2008) clearly states that “all instruments that constitute bearable arms” are protected from prohibition by the Second Amendment, unless challengers could prove otherwise. As GOA explains in its summary, “Heller noted that the definition of what is and what is not a protected arm does not turn on whether a weapon has a military or nonmilitary use.”

In the brief itself, GOA challenges the lower court’s interpretation of Heller and rehearses the history presented in the Heller decision as evidence that machine guns were not excluded in that ruling from the protection of the Second Amendment:

Rather, a fair reading of Heller would support the proposition that such ordinary military equipment is protected and, further, that it is not the only type of arm that is protected. Indeed, Heller notes that in the founding era, the same weapons were used for militia service in defense of the “free state,” for private self-defense, and even for hunting, and other purposes. Heller explained that the Second Amendment protects more than ordinary military equipment, and it is a “startling reading” of Heller to twist the passage to support the opposite proposition, as the district court does. [Emphasis in original.]

Pointing to precedent, the GOA summary cites the case of  U.S. v. Miller (1939), wherein the Court “indicated that weapons which are ‘ordinary military equipment’ (like the M16) are protected.” Finally, the GOA declares that “federal court judges continue to use in Second Amendment cases to blatantly permit the ‘infringement’ of a right that ‘shall not be infringed.’”

There is nothing in the Second Amendment that excludes ownership of any weapon — machine gun or otherwise —  from within its protection. In fact, the text of the Second Amendment is very clear regarding the government’s ability to qualify this most basic liberty: “the right of the people to keep and bear arms, shall not be infringed.” (Emphasis added.)

Many “gun rights groups,” though, believe that the government has the right to give and take away the right to own firearms depending on whether the person has complied with “reasonable” federal guidelines. This is treachery!

Although Americans have allowed this right to be redefined by Congress, the courts, and the president, the plain language of the Second Amendment explicitly forbids any infringement on this right that protects all others.

In fact, the reason for inclusion of the Second Amendment in the Bill of Rights had little to do with the British and more to do with future attempts by an out-of-control, all-powerful central authority disarming the American people as a step toward tyranny. Take, for example, theses statements by our forefathers regarding the purpose of the passage of this amendment:

In commenting on the Constitution in 1833, Joseph Story wrote:

The right of the citizens to keep and bear arms has justly been considered, as the palladium of the liberties of a republic; since it offers a strong moral check against the usurpation and arbitrary power of rulers; and will generally, even if these are successful in the first instance, enable the people to resist and triumph over them.

In his own commentary on the works of the influential jurist Blackstone, Founding-era legal scholar St. George Tucker wrote:

This may be considered as the true palladium of liberty…. The right of self defence is the first law of nature: in most governments it has been the study of rulers to confine this right within the narrowest limits possible. Wherever standing armies are kept up, and the right of the people to keep and bear arms is, under any colour or pretext whatsoever, prohibited, liberty, if not already annihilated, is on the brink of destruction.

In his A View of the Constitution of the United States of America, William Rawle wrote in 1829:

The corollary, from the first position, is, that the right of the people to keep and bear arms shall not be infringed.

The prohibition is general. No clause in the Constitution could by any rule of construction be conceived to give to congress a power to disarm the people. Such a flagitious attempt could only be made under some general pretense by a state legislature. But if in any blind pursuit of inordinate power, either should attempt it, this amendment may be appealed to as a restraint on both.

Read at the New American