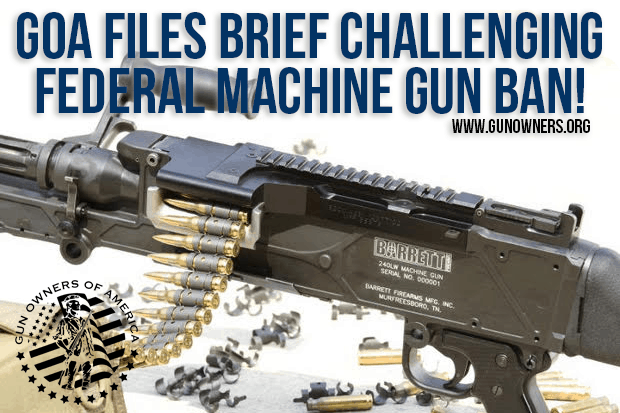 Gun Owners of America — and its Foundation (GOF) — has filed an important amicus brief in the U.S. Court of Appeals for the Third Circuit, in support of a challenge to the federal machine gun ban.

This brief in U.S. v. Watson comes on the heels of our November 1 brief in the Fifth Circuit in a similar machine gun case.

At issue is the constitutionality of a part of the 1986 McClure-Volkmer legislation, which prohibits the manufacture and possession of machine guns by Americans unless they were registered prior to the date of the Act.

The case in Watson (submitted on December 9, 2015) involves a family trust that had applied to manufacture an M16 and challenged ATF’s eventual denial of that application.

Check out the brief here.

And you can give a contribution to help support this case here.

Our brief attacks the opinion of the district court, which treated the challenge as foreclosed by a prior Third Circuit opinion, U.S. v. Marzzarella.

That case stated — in dicta — that machine gun prohibitions are constitutional. But Marzzarella, we noted, was wrongly decided and in blatant conflict with Heller v. D.C. (2008), and with the Second Amendment’s unambiguous text.

(Notably, Marzzarella mistakenly alleged that the Supreme Court has ruled that the machine gun ban is constitutional, but then cited an Eighth Circuit case as authority!)

We argue that Heller supports exactly the opposite position — that machine guns are protected arms. Heller stated that “all instruments that constitute bearable arms” (like an M16) are protected by the Second Amendment, unless proved otherwise.

Indeed, Heller noted that the definition of what is and what is not a protected arm does not turn on whether a weapon has a military or nonmilitary use.

And the Court, even as far back as U.S. v. Miller (1939), indicated that weapons which are “ordinary military equipment” (like the M16) are protected.

Heller followed that up by noting that military-grade weapons are not the only sorts of weapons that are protected.

Rather, the Second Amendment protects a whole variety of “arms,” including those used for private self-defense, hunting and target shooting — in addition to military grade weapons (like the M16) for defense of the free state against tyranny.

Next, the GOA brief in Watson shows how the M16 is the lineal descendant of the founding-era blackpowder muskets and rifles. Far from being “dangerous and unusual,” it is simply the most recent development in a long chain of firearms evolution.

At each stage along the way, one could make the same arguments that the anti-gunners today make about machine guns — that the new weapons have greater firepower, enable a shooter to shoot and reload more quickly, and are thus more effective at what they do.

But newness and greater effectiveness does not mean that something can be banned because, as the Supreme Court has made clear, the Second Amendment extends to all “bearable arms, even those that were not in existence at the time of the founding.”

The Second Amendment protects future technology, in the same way that radio, TV and the Internet disseminate information more quickly than 18th Century pamphlets, but are still protected by the First Amendment.

Finally, the GOA brief in Watson attacks the “judge-empowering, interest-balancing” tests that the Heller Court explicitly rejected, but that lower federal court judges continue to use in Second Amendment cases to blatantly permit the “infringement” of a right that “shall not be infringed.”

Although the district court did not find it necessary to engage in balancing — finding that machine guns do not even fall within the scope of Second Amendment protection — we urge the Third Circuit not to give in to the temptation to balance away express constitutional rights in exchange for vague, amorphous policy notions like public safety and crime prevention.

GOA’s Christmas Gift to You