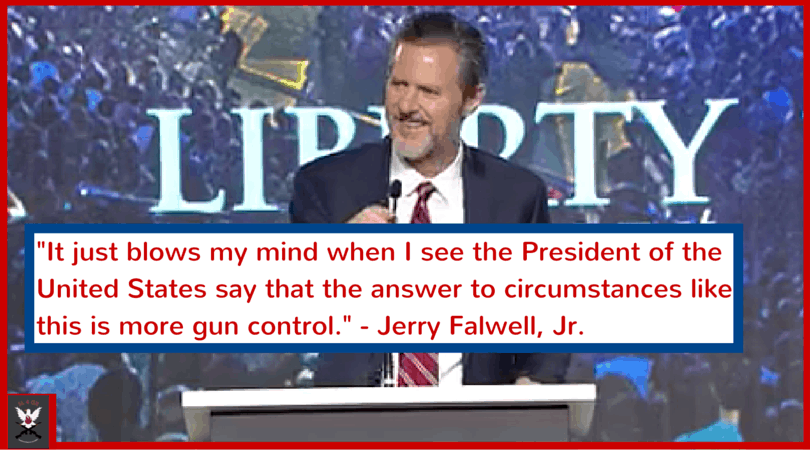 He came under fire from those in the media. Even Hillary Clinton attacked, saying that he was “aiding and abetting ISIS.”

But Students at Liberty for Gun Rights (SL4GR) came out in strong support for President Falwell and his comments on guns. We are one of the largest student groups on campus with over 70 members. We provide a voice for Liberty’s students on matters relating to gun policy.

Today, in Convocation, President Falwell announced that guns would be allowed in dorms. From our founding, SL4GR has strongly supported allowing guns in dorms.

Before today’s announcement, LU’s weapon policy, allowed for one gun free zone – the dorms. The policy was publicly posted online with our well-known curfew policy. Anyone wanting to cause evil could coordinate an attack on the gun free dorms after curfew – leaving students defenseless.

This was a legitimate concern because every mass shooting since 1950, expect for two, has happened in a gun free zone.

In addition, the policy states that one must store his firearm in his vehicle or with Liberty University Police Department (LUPD). However, many students live far away from where they park or from the LUPD, further discouraging concealed carry.

When the policy change goes into effect, there will no gun free zones on campus. Students will be able to defend themselves everywhere on campus at all times.

Allowing guns in dorms will strengthen student safety on campus. While the specifics of the policy change have not been released, SL4GR recommends that the University provide secure, but quick-access lockbox for students to store their firearms.

SL4GR is proud of the administration for making this change. And it’s a testament to the student activists that helped make that happen.

–Jordan Stein, Founder and President of Students at Liberty for Gun Rights