I am Charlie (Bronson)

I am Charlie (Bronson)
by Larry Pratt

Practitioners of the “Religion of Peace” have struck again.  This time, two of their “missionaries” went to the offices of a Charlie Hebdo, a satirical magazine in Paris, where the dirtbags killed a dozen innocent people.

We’ve seen this kind of terrorism before.  One of the Muslim murderers was actually shouting “Allahu Akbar” during his butchery.  But if Allah expects to be praised during the commission of cold-blooded murder, wouldn’t that make him the Dirtbag-in-Chief?

If the FBI were in charge of the investigation, they would probably conclude that the motive for the attack was unclear.  Just another case of “workplace violence,” don’t you know?

The response of many on the internet in France has been to post: “I am Charlie.”  Personally, I would rather identify myself with the flawed characters played by actor Charles Bronson — who typically used guns to stop the bad guys — than to identify with a magazine that portrayed Jesus Christ as a pig.  But this doesn’t mean the writers should have been murdered. 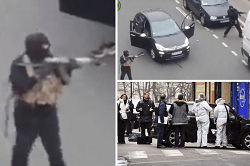 Hopefully, the “I am Charlie” response will go a lot farther than simple words.  Concealed carry of firearms is not legal in France — and owning firearms is all-but-illegal — so the Muslim terrorists had great confidence that their victims would be sitting ducks.

Shortly before this, another Muslim “missionary” called upon patrons of a chocolate store in Sydney, Australia.  Two victims were murdered by the dirtbag before a police sniper was able to send him off to his unlamented reward.

Sadly, something similar could happen in many places in the United States.  For example, all U.S. military installations are as gun-free as the streets of France and Australia.  Oh, but it already has happened here: Major Nidal Hasan did his little bit for jihad by murdering thirteen and wounding 30 more at the Fort Hood Gun Free Zone in November of 2009.

Although Major Hasan was shouting “Allahu Akbar,” the military ruled the jihad attack an “act of workplace violence.”  As long as we have a bunch of Mr. McGoos in charge of investigating our jihad murder scenes, we are not as likely to conclude that people should be armed in public.

As in France and Australia — and also in many of our (mostly) urban areas — people have been disarmed by laws that either ban possession or carry of firearms, or by laws that make it virtually impossible to be armed in public.  Why not just send a letter of invitation to the Mayor of Mecca inviting him to send more of his “missionaries” to our soft targets here in the West?

Indeed, gun-free zone laws might as well be considered an invitation to come to our Muslim Missionary Target Ranges.  We have tried to ignore the Muslim connection to many of our mass murders. One has to really search to learn that the Salt Lake City Trolley Square mall massacre in 2007 was committed by a Muslim.  He was wearing a mini-Quran necklace, and his body was prepared by a local mosque before being shipped to Bosnia.

The only kind of “gun control” that is going to help deter this terrorist threat will be laws that facilitate people going about armed in self-defense.  Then we can truly exclaim: “Praise the Lord and pass the ammunition!”

Larry Pratt is the Executive Director of Gun Owners of America, a gun lobby representing more than one million members and activists.