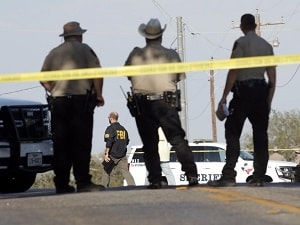 “If there is any message to be learned from this, it is that Congress and the state legislatures need to disabuse themselves of the notion that passing more gun control laws will somehow make Americans safe.” – Erich Pratt

The 26-year-old gunman who killed 26 people and injured 20 others in a Texas church had been denied a gun license from that state. Devin Patrick Kelley tried to get a license to carry a gun in Texas but the state denied him one.

Kelley received a bad conduct discharge from the U.S. Air Force after being court-martialed in May 2014 for assaulting his wife and child. He was also sentenced to 12 months confinement and two reductions in rank to basic airman. Since his discharge was for “bad conduct” and was not a “dishonorable” discharge, he was still able to buy firearms legally.

Kelley walked into the First Baptist Church in Sutherland Springs, Texas, wearing all black, and he started firing. On his way out of the church, the suspect dropped his rifle and fled after being confronted by a local man who had grabbed his rifle. The local man shot at Kelley, and it was later learned that he hit Kelley twice with bullets.

Kelley was found a short while later, roughly five miles away, dead in his car from what appeared to be a self-inflicted gunshot wound, and having crashed his car.

This was the largest mass shooting in Texas’ history.

Gun Owners of America grieves at the senseless attack on churchgoers in Sutherland Springs, Texas. The evil which would cause even a demented individual to open fire in a church is incomprehensible to any sane mind. Our thoughts and prayers certainly go out to the victims of this horrific tragedy.

The shooter passed background checks, and he was denied a carry permit. However, these gun control measures – even with the denial of a carry permit – did not prevent the shooter from carrying out his evil act.

However, an armed citizen who engaged and chased the shooter did end the threat. Officials have stated he ‘may have saved countless lives.’

If there is any message to be learned from this, it is that Congress and the state legislatures need to disabuse themselves of the notion that passing more gun control laws will somehow make Americans safe.

Gun Owners of America continues to urge Congress to pass H.R. 38 which, among other things, would further encourage law-abiding Americans to carry guns with them.