Gun Owners of America: Time to Let Gun Grabbers Know We Will Not Comply

Gun Owners of America:  Time to Let Gun Grabbers Know We Will Not Comply 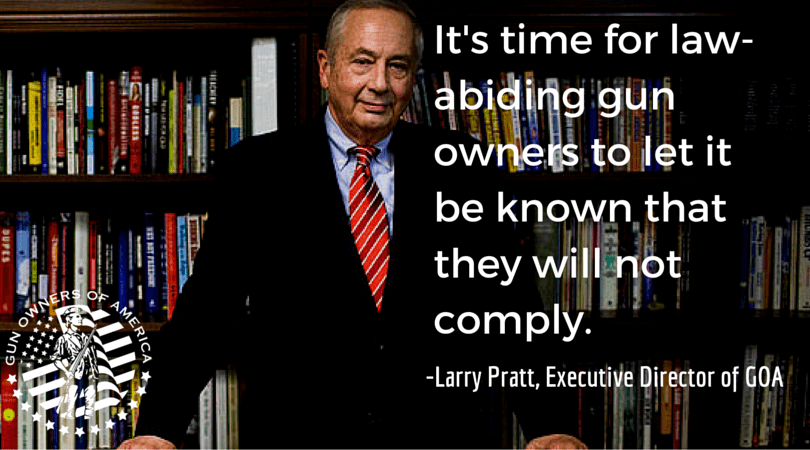 On November 12, CBS NEWS reported that “White House lawyers” are examining gun laws to find an avenue where President Obama can use executive action to go around Congress and expand background checks to cover private gun sales….

Guns Owners of America’s (GOA) executive director Larry Pratt recently talked to Breitbart News about this behind-the-scenes maneuver and said it is past time for GOP leaders in Congress to stand up in clear opposition to Obama’s plans.

He also suggested it may be time for law-abiding citizens to simply let it be known that they will not comply, much like citizens in Washington state did after Michael Bloomberg and other one-percenters doled over millions upon millions of dollars to expand background checks to private gun sales in that state.

I kind of like what was done in Washington State. Where folks went in front of a government building — they actually had some police participating — and they exchanged guns openly, trading this one for that one or selling this gun to one individual and buying a different gun from another. So they spent some amount of time exchanging firearms, but not a piece of paper had ink put to it. They all kind of had a good time and went home.

I’m guessing if we could do something similar — probably not in the District of Columbia — but perhaps in Alexandria or Richmond, Virginia, we could go to a federal building and do the same thing.

Pratt then turned his attention to the GOP:

I guess if we listened very carefully, we might hear one or two Republicans say this is illegal. But no one is talking about impeaching him, no one is talking about shutting the money off for these kinds of enforcement activities — which they can do and which would be a lot easier than impeaching; just go ahead and turn the money off and that’s that. The Republicans have ways to deal with Obama that are serious, but he hasn’t seen any effective opposition from the Republicans.

Post’s Ingraham Suggests Gun Owners Should Be Treated Like Terrorists