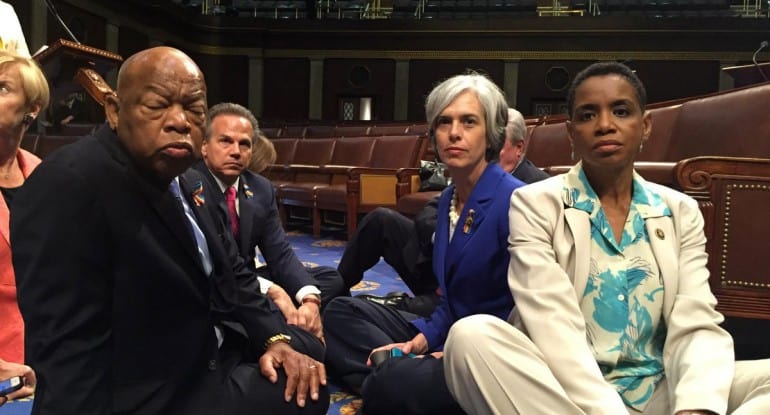 For every horrific tragedy of the last twenty years, there have always been efforts by moderate Republicans and some in the gun community to respond to Democratic gun control with “gun control lite” – also known as “Constructive Republican Alternative Proposals” (“CRAP”).

A CRAP gun control proposal is currently setting up on H.R. 5611, the proposed House “anti-terror” bill. We urge you to oppose the bill.

The central problem is that H.R. 5611’s “gun control lite” accepts Barack Obama’s and Hillary Clinton’s premise that “gun = terror.”  But Paris with its total gun control, and Florida, with its “night club gun ban,” disproves that false premise.

Chuck Schumer put it this way: “The fact that terrorism has been intertwined with the gun issue puts greater pressure on the Republican Senators…”

Make no mistake about it: Your strategy relies on the prospect that your bill is “going nowhere.”  But the Senate has 54 votes to replace your gun control with gun control that Barack Obama would embrace.  And negotiations and political pressure for more votes are still underway. So your strategy leans pretty heavily on a theoretical Senate filibuster.

The hypocrisy here is that Barack Obama is falling head-over-heels to import Syrian refugees (which, no doubt, includes embedded terrorists who cannot be vetted).  At the same time, he is all too willing to scapegoat 100-150 million law-abiding gun owners for a massacre that did not involve them in any way.

In the Senate, this “gun control lite” language was nothing but a strategic ploy which was doomed to failure. But there is an increasing danger that Republicans will regard passage of this gun control garbage as actually desirable. This would be a mistake.

To start with: In an effort to make irrelevant gun control proposals “relevant” to Omar Mateen, the gun control in this bill would be triggered by a law enforcement investigation, that could include a pro-gun individual or group.

•Remember when anti-gun Rep. Carolyn Maloney asked the Capitol Hill police to investigate GOA’s Larry Pratt because he said the Second Amendment was the last resort against tyranny?

You will see more of this if H.R. 5611 passes.  Loretta Lynch could move every staff member of Gun Owners of America or of the National Rifle Association to the verge of a lifetime gun ban by conducting a cursory “investigation” of us. And it appears that New York’s Attorney General or California’s Attorney General could do the same.

Once a Lynch-investigated pro-gun activist tries to buy a gun, all it would take is for Lynch to get a court to accept an “emergency petition,” and that activist would be subject to a lifetime gun ban.

But what about the “due process” procedures? There are at least four problems with these:

•First, the bill’s standard of “probable cause” with respect to a FUTURE crime is pretty much like the movie Minority Report’s “thought crimes.”

•Second, under judicial precedent, Lynch could classify all of the information relevant to the case, meaning that (a) your lawsuit would be like a fighting with a blindfold; and (b) most of the important meetings would be in camera between the judge and the Justice Department.

•Third, for these reasons (in the same way as is the case in a grand jury or FISA court proceeding), the Justice Department could get an emergency petition for the proverbial “ham sandwich.”

•Fourth, as Congressmen Tom DeLay’s staff found out, taking on a full-court press by the Justice Department costs at least $2 million in legal fees — up front. And no, no one’s going to take a gun owner’s case pro bono on the basis of the unlikely possibility of legal fees at the end.

So, yes, H.R. 5611 represents a stupid political judgement to accept the Democrats’ anti-gun narrative. And no, its language is not innocuous.

For all these reasons, GOA will score support for this legislation on both the rule and the bill as “anti-gun” — unless the anti-gun provisions are stripped out.

And if Democrats get credit for killing gun control (albeit for the wrong reasons), so be it.

P.S.  There is not one thing in H.R. 5611 that would have stopped the Orlando shooter from engaging in his ISIS-inspired terror attack.  But if the Pulse night club had NOT been a gun-free zone, lives could have been saved — as evidenced by concealed carriers who successfully protected lives last year at a Youngstown, Ohio bar and, more recently, at a bar in South Carolina.  Why aren’t Republicans, instead, considering Constitutional Concealed Carry (like H.R. 923)?