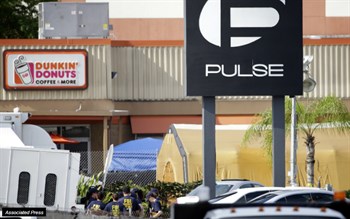 MSNBC host Thomas Roberts appeared livid in his response to a pro-gun rights guest Monday who suggested that the jihadist massacre that killed 49 and wounded 53 at an Orlando, Florida, “gay” nightclub last week was the result of a gun-free zone — not guns.

Gun Owners of America executive director emeritus Larry Pratt told Roberts that the classification of the weapon used by the admitted ISIS allegiant/soldier during his attack had little to do with the issue at hand — the one that he says made such a massacre possible in the first place.

“The type of weapon is substantially irrelevant,” Pratt told Roberts during a television interview on MSNBC. “What is relevant is it was another murder magnet.”

The gun rights activist went on to explain that the mass shooting terrorist attack was made possible because The Pulse nightclub was located in one of Orlando’s gun-free zones.

“Another gun-free zone,” Pratt insisted as being responsible for the shooter, Omar Mateen, being able to unload more than 100 uncontested rounds into defenseless patrons at the club. “That’s what we’ve got to put a stop to.”

Seemingly livid by Pratt’s gun control stance on the issue, Roberts challenged his conservative guest to tell the relatives of the Orlando shooters’ victims that the assault weapon he used was not the major factor behind the carnage.

“I would dare you to say that to the families who lost a loved one that the weapon used is irrelevant to why their loved one is dead,” Roberts retorted — visibly angered by such an idea.

Unwilling to back down from his argument, Pratt replied that he would be more than happy to expose the liberal hypocrisy unloaded by politicians and the media concerning their slant on what enabled the Islamic terrorist to claim so many innocent lives.

More contentions from the Left

After seeing that Pratt was unfazed by his challenge, Roberts proceeded to muse over why Americans can purchase firearms resembling the weapons used by soldiers fighting on the battlefield.

Again, Pratt appeared unflustered and confident in his response, which defused Roberts’ loaded question, according to one report.

“Pratt calmly explained that the military uses automatic firearms — while the gun used at the Orlando attack was semiautomatic,” Townhall reports. “That gun, [Pratt] continued, has been available for purchase for 50 years.”

“It was obvious Pratt was not going to convince Roberts that guns were not the enemy in Orlando,” Townhall continued in its report. “Roberts is one of many media figures who have chosen to blame firearms — and not terrorism — for last Sunday’s slaughter.”

Recharged fight against guns and the Second Amendment

The Orlando massacre was the most recent mass shooting that gun control lobbyists have seized to push their anti-gun agenda and unarm America.

Earlier this week on Monday, progressives in Washington, D.C., put forth four different gun control measures for legislators to vote on. However, conservatives in office are looking to curb the Leftist congressmen’s anti-gun campaign and stymie efforts to make it more difficult for law-abiding Americans to protect themselves.

Those choosing to defend their constitutional right to bear arms are contending that there is no gun law that would have kept the jihadist gunman from mercilessly killing or injuring more than 100 in the worst mass shooting in United States history.

One fact most gun control activists fail to mention about the Orlando terrorist attack is that the militant Islamic shooter passed a background check before he legally bought the firearm that he used to murder dozens of innocent Americans.