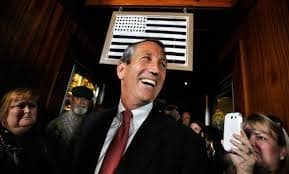 “Sanford’s victory demolishes the Obama-Bloomberg myth that opposition to the universal gun registry is a liability,” said GOA Director of Communications Erich Pratt.

While there are thirteen pro-gun states which will have Senate elections in 2014, there are no blue state Republicans who are up for reelection in 2014 — with the possible exception of Maine.

Even on the eve of the election, with Sanford obviously surging, PPP still had Sanford and Busch within one point of each other.

“PPP and Bloomberg’s Mayors Against Illegal Guns have led a fraud campaign attempting to convince Republican Senators that their political careers have collapsed as a result of their opposition to gun control,” Pratt said.

“This campaign of deception has attempted to frighten senators based on polling numbers which have dropped as little as 2% in Nevada since October — and 6% in Alaska.  Both of these numbers are less than the number by which PPP missed the Sanford-Busch results,” Pratt said.

Addressing those who defended PPP’s 18-point error by claiming that the race shifted in the last week, Pratt asked:  “How is it then that PPP is pronouncing doom on Senator Kelly Ayotte’s race in 2016 and Jeff Flake’s race, which is five and a half years away?”

“Although PPP’s questionable ‘robo-call’ methods had some success in candidate head-on-heads during the 2012 elections — where questions were difficult to fudge — PPP has, since then, prostituted itself to the gun control crowd,” Pratt said.  “And its credibility has gone down the toilet in the process.

“The Sanford debacle has exposed PPP for the political hacks that they are,” Pratt concluded.

Even before the Sanford race, GOA was critical of how the leftist PPP firm was targeting Senators, who had recently cast pro-gun votes, and was deceptively twisting their polling numbers.

Gun Owners of America has published “Twenty Reasons Why the PPP Results are Fraudulent.”