Hillary Could Owe Donald Big if She Wins White House

Hillary Could Owe Donald Big if She Wins White House 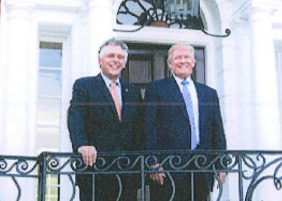 If Hillary Clinton wins the White House in November, she will almost certainly have won Virginia.  And if she wins Virginia, she owes a huge debt of thanks to her old pal, Donald J. Trump.

You see, in 2009 (not exactly ancient history) Trump donated a staggering $25,000 to Terry McAuliffe, then running for governor of Virginia.

It didn’t bother Trump that McAuliffe was a close confidant of Bill and Hillary, serving as co-chairman and chairman, respectively, of their presidential campaigns. McAuliffe even guaranteed the Clinton’s $1.35 million mortgage on their Chappaqua, NY, home when Bill left office.

Trump the “deal maker” didn’t care that McAuliffe chaired the Democrat National Committee (DNC) when the Party took a hard left turn and started losing pro-gun Democrats across the country.

It apparently was not a problem that McAuliffe himself is an outspoken anti-gun activist.

McAuliffe later went on, in 2013, to narrowly defeat Ken Cuccinelli, perhaps the strongest pro-gun attorney general in the country.

Okay, so what does all this have to do with the race for the White House?

Like Obama, McAuliffe has a phone and a pen, which he used to circumvent the legislature, and the constitution of Virginia, to help his pal Hillary.

And it should come as no surprise that McAuliffe’s action restored felons’ right to vote, run for office, sit on a jury and become a notary, but not to own a firearm.

If McAuliffe were truly concerned about restoring lost liberty, surely he would have restored the right to protect one’s own life with a firearm.

Already, as reported by the New York Times, “Advocates who have been working with the Virginia governor say they are planning to fan out into Richmond communities Friday to start registering people.”

If McAuliffe’s unconstitutional action is not overturned, it will make it that much tougher for ANY Republican to win in the Old Dominion–a key state on the road to the presidency–as the new voters “thank” McAuliffe by voting for Hillary.

Ironically, while Trump brags about his “deal making” prowess, it is that wheeling-and-dealing that has now made it all the easier for an anti-gun Democrat to win an important state like Virginia in November.

Trump does not seem to grasp that making deals in politics is not the same as in real estate, where you can have a win-win outcome.

When you sit down at the table with Terry McAuliffe, Nancy Pelosi or Chuck Schumer to negotiate on, say, a gun bill, it’s a zero-sum game for them.  The discussion will always end up being how many of our rights will we lose.

A “compromise” to an anti-gunner is a ban on “certain” semi-automatic firearms, instead of a ban all semi-automatics.  A 3-day waiting period verses seven days.

We know Donald J. Trump doesn’t understand the gun issue.  He supported an “assault weapons” ban before he opposed it and just last year he endorsed the notion that people on a secret government “watch list” should be barred from owning guns.

Trump is bragging about the “deals he’ll make” specifically with Chuck Schumer and Nancy Pelosi.  In that negotiation, our gun rights could very well be the bargaining chips.

John Velleco is the Director of Operations for Gun Owners of America, a grassroots lobby representing more than 1.5 million gun owners across the country.