Written by Tim Devaney of The Hill Published: 26 March 2015

Gun rights groups are rallying their members behind a series of budget measures aimed at strengthening the Second Amendment and restricting gun control efforts.

As the Senate debates the federal government’s 2016 budget, Republicans and gun advocates are pushing for a number of amendments that would expand concealed-carry laws and block the Obama administration from issuing what opponents call a “backdoor” ban on guns.

“We expect more gun-related showdowns in the next 72 hours than in the next nine months combined,” the Gun Owners of America wrote in a message to supporters asking them to call their senators about these issues. 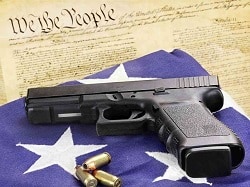 The Senate is looking at a number of various pro-gun amendments that would expand concealed carry laws and block future gun control initiatives.

For instance, an amendment from Sen. Mike Lee (R-Utah) would block “any legislation that would place further restrictions on the right of law-abiding Americans to own a firearm,” according to the senator’s office.

The amendment would block gun control measures seeking to ban semi-automatic weapons and magazines, and create a national gun registry, unless they have support from two-thirds of senators.

The recent attempt by the Bureau of Alcohol, Tobacco, Firearms and Explosives (ATF) to ban certain types of armor-piercing ammunition used in AR-15 rifles is still fresh in the minds of many Republican lawmakers.

The ATF dropped its bid to ban this high-powered ammunition earlier this month, but Republicans and gun rights groups are concerned the agency may try to revive the ban in the future.

In response, Sens. James Inhofe (R-Okla.) and David Vitter (R-La.) are pushing an amendment that would prohibit the ATF from attempting to ban bullets that are primarily used by hunters and sportsmen.

The Gun Owners of America and National Association for Gun Rights are both actively lobbying lawmakers in favor of these measures and urging their members to do the same….

Inhofe is also offering other pro-gun amendments prohibiting the Obama administration from establishing a national firearms registry and barring the government from pressuring banks to close gun shops’ bank accounts.

The National Rifle Association did not respond to requests for comment.

When Armed Robber Becomes Victim: Intended Victim is Armed and Ends Robbery Before It Even Starts