While Republican Sheriff Hanson campaigned on protecting the Second Amendment, he’s wasted no time betraying that 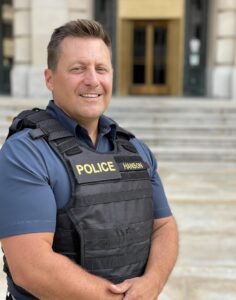 promise to gun owners when it comes to permitless carry. Here are the details.

I’m not surprised that Sheriff Hanson would remain conveniently silent on Omaha gun registration. You see, he’s a former Omaha police officer and the police department is the agency that registers handguns in Omaha.

But there are even worse things in Sheriff Hanson’s letter.

On page 2 of the letter to Senator Brewer, Hanson opposes “open carry” of firearms, stating, “’Open Carry’ of weapons in densely populated communities like the Omaha Metro areas has the potential to create public safety implications and challenges. As I read it, LB 77 would remove the local government’s ability to limit ‘open carry’ of weapons.”

Instead of restoring your constitutional rights, Sheriff Hanson believes that you cannot be trusted to carry your firearms openly in Omaha.

Sheriff Hanson also believes that Nebraska should have a mandatory training requirement for permitless carry. On page 4 of his letter to Senator Brewer, Hanson asks to “Please consider adding training in your final draft.”

If that weren’t enough, Sheriff Hanson thinks you should pass a government background check for permitless carry. On page 4, Hanson states that “Simply keeping one’s valid Nebraska handgun purchase permit readily available in a wallet is proof of passage of an ongoing 3-year background check.”

Wow! So much for Hanson being a pro-Second Amendment Sheriff!

In less than a month after taking office, Douglas County’s new sheriff goes on record as silent on gun registration, opposes open carry, endorses mandatory training, and wants Cornhuskers to undergo background checks before exercising the constitutionally-protected right to carry a firearm.

That’s why I need you to send a message to Sheriff Aaron “Hypocrite” Hanson right away by filling out the form above. Let him know that you consider his opposition to LB 77 to be a betrayal of his campaign promise to protect the Second Amendment and demand that he retract his opposition to the bill.