British novelist and theologian C. S. Lewis argued that one of the devil’s most effective tricks was to try to convince humans that he doesn’t exist. 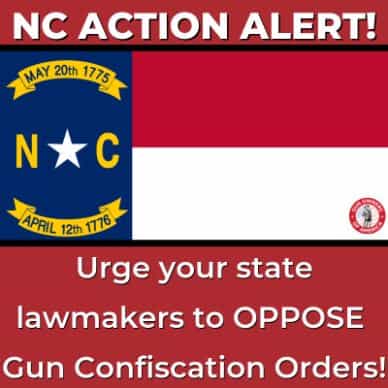 In the same way, the anti-gun Giffords organization is marketing its top priority — “red flag” Gun Confiscation bills — while trying to disappear into the background and pretend that it has nothing to do with them.

According to gun-grabbers, these Gun Confiscation bills are just “bipartisan bills” which somehow spontaneously sprung out of “an era of good feelings” between Democrats and Republicans (like Donald Trump). (And we all know how much Democrats are working to get along with Donald Trump!)

But just as the devil is the “father of lies,” so is the Giffords organization.

In fact, as recent U.S. Senate testimony from criminologist David Kopel revealed, “red flag Gun Confiscation” legislation was drafted by Giffords and is being hawked in “red state” capitals by Giffords’ anti-gun activists.

In fact, when American uniform law commissioners tried to rewrite the bill in order to incorporate a few constitutional protections, the Giffords organization objected that a “constitutional” bill would compete with their unconstitutional version.

Well, guess what?  The Giffords people are in Raleigh now, trying to sell gullible Republicans on the notion that Gun Confiscation is a “bipartisan” idea.

Their bill — House Bill 454 — is an Orwellian nightmare of gun control intended to put “points on the board” in furtherance of their ultimate goal of prohibiting civilian ownership of firearms.

Under the bill, any relative or any law enforcement official can convene a “secret court” to strip a gun owner, ex parte, of his Second, Fourth, Fifth, and Fourteenth Amendment rights without giving him any opportunity to prevent his side of the story.

One of the “humorous” aspects of Giffords-drafted legislation being hawked in multiple state capitals is that a bunch of states’ bills all have the same comical drafting errors.  In House Bill 454, ANY person related by blood to the gun owner can strip him of his guns.

After the “secret court,” the next thing that would happen is when a SWAT Team arrived at the gun owner’s home in the middle of the night, ready to ransack his house and, if he resisted, to arrest or kill him.

Think this is fantasy?  In Ferndale, Maryland, a 60-year-old gentleman was shot to death by police serving a “red flag” order at 5:17 in the morning.

In fact, they may even increase the incidence of rape, according to Lott — presumably because they leave battered women unarmed.

So, when the anti-gunners arrive in Raleigh and try to convince the GOP that Gun Confiscation Orders are “a form of gun control which everyone can embrace,” it’s time to break out the Holy Water.

House Bill 454 isn’t neutral, and it isn’t bipartisan.  Rather, it’s one of Giffords’ top priorities.

So please take action ABOVE and urge your state representative and senator to OPPOSE HB 454.

Will this one act grease the skids for gun confiscation?