Fill out the form below to urge your state lawmakers to support Constitutional Carry!

Constitutional Carry may be coming to the Tar Heel State. 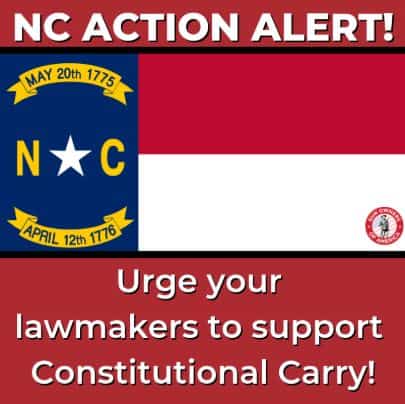 House Bill 61 — Constitutional Carry — would make North Carolina the 16th state in the country to recognize the right to protect yourself and your family without first getting the government’s permission.

At its core, it’s simple:  The bill would legalize concealed carry without first seeking government permission.

But, as in other states, this extraordinary victory won’t just fall into our laps.  It will take the efforts of all of gun owners across the state to push HB 61 through the North Carolina House and Senate and onto the governor’s desk.

So please take action above and urge your elected officials to support HB 61! You can contact your state representative and senator with just a few clicks!