Irwindale, Calif. – – Three generations of one of southern California’s favorite and best-known racing families will be on the track at Irwindale Speedway on Saturday night and they’ll all be competing in the same race! 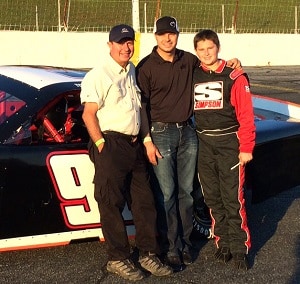 At the track known for family entertainment, July 19 at Irwindale will be family night for sure! Grandfather, son, and grandson: Butch, David, and Todd Gilliland will all suit up and report to their Pick Your Part Super Late Model rides when the call comes on Saturday night to fire off the first SLM 75-lapper of the year at Irwindale Speedway.

Grandpa: Butch Gilliland has not raced in a few years, but the winner of countless West series races, the series champ in 1997, and (still) the Irwindale track record holder for the fastest lap ever in that division, is excited about coming back to Irwindale, and particularly to be coming back to compete in a race with his son and grandson!

Son: David Gilliland has been keeping very busy on the NASCAR Sprint Cup circuit behind the wheel of the number 38 Front Row Motorsports Ford.   David’s first work in racing was as a young, 19 year-old crew chief for his father Butch when he was racking up all his race wins and that championship in the ‘West races. His win in the Nationwide race at Kentucky in 2006 was a memorable one for all three of the Gillilands.

Grandson: At just 14, Todd Gilliland does not have (quite) the resume that his famous dad and granddad have, but he’s already showing the same sort of spark that the two generations before him have exhibited. His May 2nd victory in the Limited Late Models at Ace Speedway in North Carolina came after only seven starts in the division. He’ll be a freshman in high school this year.

This special Pick Your Part race has been opened up to all Super Late Model and Spears SRL Southwest Tour teams. All competitors will run under their respective rules, but all cars will be required to compete on the Irwindale-specified SLM Hoosier tire.

And, that sub-headline above with the line “family feud” laced in there … that might be a little misleading … this race within a race will be for family bragging rights at every family gathering from now right on through forever. The saga of “Which Gilliland finished where on the one and only night that ALL of them were not just at the same race, or racing on that same night, but when they were ALL IN THE SAME RACE”, is sure to be the stuff of legends.

And if anyone, anywhere, thinks that Butch is going to take it easy on David or that David is going to let off on Todd … think again my friend, this is racing.   And now think about the 20+ other drivers out there running harder than hard with these three who all want the biggest chunk of that prize that they can get …

Grabbing first place in this 75-lapper will pay a nice, $3,000 to the victor, not bad for a thirty-seven and a half mile drive you might say. Of course when one factors in all of the above “factors” the money is nice, but the win will be remembered long, long after the dollars are spent.

As mentioned above, July 19 at Irwindale will be family night for sure. But there’s more:

Kids 12 and under will be admitted free with a regular full price adult admission (one kid for each adult ticket … tickets must be purchased at the track’s ticket window). Adding to the fun and festivities Irwindale’s delicious hot dogs, tacos, and regular sodas will only be $1.00 each on July 19!

That means bring the kids …

AND:  Fans are invited to meet and greet all three generations of Gillilands before the race at 5:45pm at Irwindale’s famous On-Track Autograph Session. All of the drivers, their cars, and their crews will be on hand right down on the racetrack before the racing starts. It’s a great time to get up close and personal with the stars of  live, local Saturday night NASCAR Home Track racing … and another great reason to bring the kids!