GOA has been monitoring the appropriations process on behalf of gun owners for several months now. 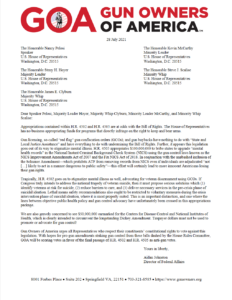 We need you to take action today and tell your Senators to VOTE NO on the final passage of the $3.5 trillion budget resolution.

Aidan Johnston, GOA’s Director of Federal Affairs, demanded the gun control be removed from the appropriations packages, but the anti-gunners refused to listen.

H.R. 4502 passed the House of Representatives, but the Democratic Party failed to unify behind H.R. 4505—and consequently the worst of the gun control never passed the House.

But those appropriations packages were never the real threat—as H.R. 4502 and H.R. 4505 would need 60 votes to pass the Senate.

It was a sham process so Nancy Pelosi could announce her wish list and draw a line in the sand.

The House appropriations are dead for the time being, and the real fight is in the Senate with the budget reconciliation process.

Budget reconciliation only requires a simple majority to pass the Senate.

That’s how the Biden Administration passed the COVID relief package entitled the American Rescue Plan back in March 2021.

And here’s the problem!

But the anti-gunners seized upon these broadly appropriated funds.

The Biden Administration has been using funds appropriated for COVID relief in the American Rescue Plan to fund his anti-gun agenda.

This is not acceptable!

And that’s why I need you to contact your Senators and tell them to VOTE NO on the Budget Resolution—before we spend our tax dollars on more federal gun control enforcement.

Until the Biden Administration can prove that Community Violence Intervention funding is not misused to fund gun control and is only used for honest police work, gun owners must oppose these anti-gun slush funds.

And after you’ve called both your senators, please use our action tool to send a follow up email reminding them that you’re opposed as well!

HIGBIE: Gun owners are not the Republican block to be taken for granted anymore.