Heinous Tragedy Followed by Millions of Messages from GOA Activists

GOA’s Team is Advancing Gun Rights Across the Country!

One year ago today, on August 3, 2019, a deranged killer murdered 23 people in an El Paso Walmart. 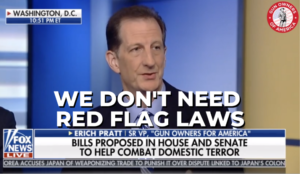 With those murders, gun control advocates used the crisis to push for Red Flag Gun Confiscation Orders. And they might have succeeded in getting such a law passed at the federal level, except that congressmen ran into a huge speed bump – that being the members of Gun Owners of America.

Three million messages from GOA supporters were dumped into Republican Senate offices and the White House – all of them demanding that they oppose gun control. This prompted one high ranking office to tell us that gun control would have become a “done deal” where it not for GOA activists.

I went on Fox News to discuss the fight against gun control; and Rush Limbaugh reported on our activities, as well. (You can watch or read Limbaugh’s mention of GOA.) In the end, GOA members were able to defeat the push for gun control in the Congress.

On this anniversary, GOA Texas State Director Rachel Malone penned an article for the Houston Courant. In this article, Rachel lays out the solution that would help prevent the El Paso-type shootings from taking place:

The [El Paso] attacker intentionally picked a place where he could prey on the defenseless.

Although the Walmart is not technically a “gun-free” zone, the specific one he picked shared a parking lot with the Cielo Vista Mall, which is posted as a “gun-free” business. So, law-abiding citizens shopping in both the mall and Walmart would have likely left their handguns in their car. He also drove 650 miles out of his way to find a Walmart close to the border that would be filled with shoppers from Mexico who wouldn’t have their Texas carry license.

Thus, it was a “gun-limited” zone in which many innocent, precious people would be defenseless. The manifesto shows that this choice was absolutely on purpose:

Don’t attack heavily guarded areas to fulfill your super soldier COD fantasy. Attack low security targets. . .. Do not throw away your life on an unnecessarily dangerous target. If a target seems too hot, live to fight another day….

[The Texas legislature needs to repeal] the dangerous policies of government-mandated “gun-free” zones and of gun carry only for the elite (those with licenses to carry).

El Pasoans — and all Americans — deserve to be able to defend themselves against any attackers who disregard the value of human life.

This is the message that Gun Owners of America is telling legislators – not only in Texas, but all across the country. Gun-free zones are a killer’s best friend, and they must be repealed.

GOA and its New Hampshire members are thanking Gov. Chris Sununu for his veto of a red flag bill that targeted senior citizens’ Second Amendment-protected rights. It was a bill supported by virtually every Democrat in the legislature. 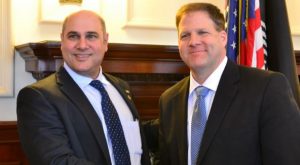 Sununu cited several constitutional infringements as reasons which contributed to his veto of the bill. He said that HB 1660 could lead to “violations of an individual’s rights under the 2nd, 4th, 5th, and 14th Amendments to the United States Constitution, as well as similar provisions within the New Hampshire Constitution.”

Gov. Sununu also praised the work of New Hampshire gun owners for “repeatedly” raising these concerns with his office.

Alan Rice, New Hampshire Director of Gun Owners of America, thanked the Governor, as well as the work of GOA’s grassroots troops:

I thank all of GOA’s members and supporters who took action to help prompt the Governor’s veto. By vetoing HB 1660, Governor Sununu kept his perfect Second Amendment record intact.

As always, GOA thanks its members for their generous financial support and activism which keeps us here on the frontlines.