RUSH: Friday night on Laura Ingraham’s show on Fox, Raymond Arroyo was the Fill-In Host, and he had a segment with Erich Pratt, who’s the Gun Owners of America senior vice president. They were talking about the potential here of increased background checks, expanded background checks, maybe red flag laws, in the aftermath of the Dayton and El Paso shootings. Arroyo said to the Gun Owners of America senior vice president, “Do your members believe the president’s caving, or is supporting background checks a sensible way to respond to these massacres while protecting gun rights?” 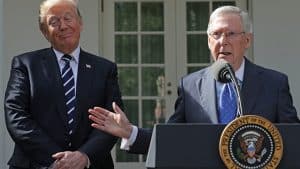 PRATT: What the president is pushing is not the only gonna violate the Second Amendment rights of Americans, it’s also gonna backfire on Republicans. This is akin to George Bush’s “Read my lips: No new taxes,” broken promise of the 1990s, and this is gonna completely backfire.

PRATT: Look, Rush Limbaugh’s been talking about this, by the way, for the past two days. Here you have a president who two years ago promised, “The assault on the Second Amendment is over,” and yet —

PRATT: — now he’s doing an about-face. If Republicans stab gun owners in the back, they’re gonna suffer at the polls in the same way that George Bush did.

RUSH: Well, I raised that possibility depending on what is done. But I just want to reiterate, folks, that the whole concept of (hysterical), “We’ve gotta do something!” has taken over Washington. It comes under the umbrella of the false premise that Washington can stop things, that Washington — that legislation — can somehow eliminate these shootings, and what we have here are people that are not really interested in solving this. They’re interested in making people think they care and are doing something.

That’s as far as it goes, and that’s really all you have to do, because everything is about feelings in this country today. So people are out there feeling bad. (sobbing) “Gotta stop it! We gotta stop! We’ve gotta do something.” Washington hears it. “Okay, we’ll expand background checks! Okay, red flag laws.” People go (sobbing), “Thank you. Thank you for doing something. We feel so much better. Thank you.” Meanwhile, there hasn’t been a single thing done that would stop this. All that’s happened is more laws on the already law-abiding have been proposed.