THIS IS AN EMERGENCY. The long-awaited gun control deal is now being debated by the Senate.

Last night the Senate commenced debate on this gun control scheme with a 64-34 vote. More votes will come over the next few days.

The legislative vehicle that the Senate is using for the so-called “Bipartisan Safer Communities Act” is S. 2938. As the title of this bill implies, there are several Republican Senators who have joined with all the Democrats to sell you out.

Here are the 14 Republicans who voted with New York’s Chuck Schumer last night to allow the Senate to begin debating this anti-gun bill:

We should relentlessly hold accountable the Senators listed above. But we should thank the Republican Senators who are NOT listed, as they stood up for our 2A rights and voted against this horrible bill.

Realize that regardless of how your Senators voted last night, every Republican Senator is coming under tremendous pressure to betray you to Chuck Schumer & Joe Biden.

That’s because your Senators will still have to vote on amendments to S. 2938, as well as, to vote on final passage which could come as early as tomorrow.

Tell them to oppose this anti-gun deal, and to instead support the arming of willing teachers and staff.

And then please consider making a contribution to our 2A Protection Fund, as that will enable GOA to rally even more gun owners to oppose this anti-gun Senate deal.

So what’s in this terrible Senate gun deal? I’m sorry to report that it will:

The final vote on this legislation could come as early as Thursday. So your two Senators need to hear from you today, to make sure they know that millions of pro-gun Americans want them to OPPOSE this vicious gun control. 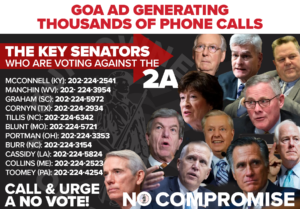 Please tell them to OPPOSE THIS DEAL.

GOA is pulling out the stops. We are spending thousands of dollars for ads to generate thousands of phone calls into key Senate offices. We are doing everything we can.

But unless you and I stop this betrayal, we will be under a regime of kick-in-your-door gun confiscation raids based on anonymous tips, and an almost-certain national tracking database of every private gun sale.

And, even worse, it will be blood in the water.

You and I both know once gun grabbers get weak-kneed senators to flinch and cut a deal, they will come back for even more.

This so-called compromise does NOTHING to keep kids safer.  It does nothing to ensure that willing teachers can be armed to protect our children – an idea supported by 81% of police.

Nor does the legislation do anything to delete the near one billion gun records which the ATF has ALREADY compiled.

No, the entire point of this Senate ploy is to score a “win” for anti-gun Leftists and make peaceful gun owners the enemy of the state so they can launch bigger attacks.

Please IMMEDIATELY call your Senators at 202-224-3121 because there are still votes about to happen on this scheme.

You and I can stop this if your Senators feel enough pressure to drop their support and oppose any deal on your gun rights.

Again, we are spending multiple thousands of dollars to generate enough heat to stop the Senate from agreeing to this sell-out deal.

So, please, to protect your gun rights, I need you to do two things:

1) Call your Senators at 202-224-3121. Tell them to oppose this back-stabbing deal, and to instead support the arming of willing teachers.

2) And please make the most generous contribution you can to our 2A Protection Fund, so that GOA can rally even more gun owners to oppose this anti-gun Senate deal.

This betrayal of you and me by weak-kneed senators is an emergency.

We must have the resources to fight back for you.

You and I can hopefully stop it, but I must be able to contact thousands of additional patriots like you – AND IMMEDIATELY.

The final vote could happen any day – possibly as early as tomorrow.

(1) According to a summary of the draft bill, says The Washington Post, “an existing Justice Department grant program would be expanded to allow funding for state ‘crisis intervention programs,’ including not only red-flag laws but also drug courts and veterans’ courts.”

(2) The Senate bill broadens the definition for which gun sellers will be required to register as an FFL. Speaking about this provision, anti-gun Senator Chris Murphy (D-CT) stated, “My belief is that that provision alone is going to cause thousands of more gun sales in this country to go through the background check system.” (MSNBC, June 22, 2020) As stated above, this change will serve as a backdoor way to impose Universal Background Registration Checks for almost every private gun buyer. And it would do this without deleting the almost one billion gun records that the ATF has already compiled.