On Monday, the U.S. Supreme Court took a whack at the ten appeals by pro-gun groups of anti-gun decisions made by the lower courts. 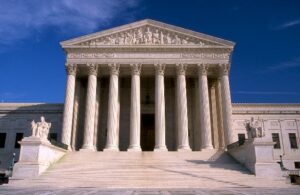 With at least the anti-gun Bush appointee John Roberts voting wrong on every case, the court refused to consider ANY of the Second Amendment appeals.

Back in 2004-05, then-Massachusetts Governor Mitt Romney signed a semi-auto ban which purportedly reflected the federal ban which expired in 2004.  But now, Healy is using “weasel words” in that legislation in order to create a new regulatory ban on virtually every semi-automatic.

And yet, the Supreme Court didn’t seem to feel this appeal was worth its time. Very sad.

Justice Thomas wrote a strong dissent from the court’s denial of certiorari in the Rogers v. New Jersey case, where he argued:

The Second Amendment protects “the right of the people to keep and bear Arms.” We have stated that this “fundamental righ[t]” is “necessary to our system of ordered liberty.” Yet, in several jurisdictions throughout the country, law-abiding citizens have been barred from exercising the fundamental right to bear arms because they cannot show that they have a “justifiable need” or “good reason” for doing so. One would think that such an onerous burden on a fundamental right would warrant this Court’s review. (Emphasis added)

While Justice Kavanaugh joined with Justice Thomas for most of the dissenting opinion, he did not join Justice Thomas for the paragraphs arguing “that the Second Amendment protects a right to public carry” — something that is very concerning.

The disagreement between two conservative justices remains puzzling to court observers, who would otherwise assume the biggest problem was Bush-appointee John Roberts.

Although Samuel Alito and Neil Gorsuch also voted not to take up gun cases, most observers believe that, for Alito and Gorsuch, it was a strategic move to avoid anti-gun decisions handed down by a coalition of at least one Republican nominee, Justice Roberts, and the court’s four liberals.

Regardless of backroom Supreme Court politics, this should come as a warning to gun owners that any hope of striking down gun control in the courts will be lost for decades to come if Joe Biden appoints the next two SCOTUS justices.

Please make sure that you’re registered to vote — and encourage your pro-gun family and friends to click here and register to vote if they are not already.

And check out Executive Vice President John Velleco’s article from today in The Truth About Guns where he explains the sad state of affairs at the Supreme Court, but shows the silver lining to which gun owners can look forward.

While the Supreme Court has routinely disappointed gun owners, there is good news elsewhere.

The Oklahoma legislature passed into law a prohibition on anti-gun “red flag” Gun Confiscation in that state. This law, which prohibits funds for Red Flag gun confiscation orders, is the first of its kind in the nation.

GOA’s Erich Pratt said in a press release that, “At a time when the anti-gun Left and even some on the right are pushing these dangerous Red Flag gun confiscation orders, it’s very encouraging to see a state stand up for the Constitution and Bill of Rights.”

While GOA supported this legislation, we thank the Oklahoma 2nd Amendment Association for its leadership in getting this legislation passed. GOA is also grateful to the all gun owners and activists in the Sooner State who worked hard to press their legislators — and the Governor — to support this legislation.

GOA’s legal team has been active around the country, opposing governors who have shut down gun stores and gun ranges.

Our list of most-recent victories include Massachusetts, Virginia, North Carolina and Maryland.

“Not only is it essential to be able to acquire firearms in times of uncertainty, it’s equally important to have the ability to train with those firearms. That is why GOA relentlessly fought to reopen not only gun stores, but also shooting ranges as well,” Erich Pratt, Senior Vice President of GOA said.

In Virginia, GOA and the state-based VCDL have filed suit to strike down the newly enacted one-handgun-a-month law. And our legal team plans to challenge many of the other gun control ordinances that were recently signed into law by Gov. “Blackface” Northam.

We want to thank you for all your activism and support. It’s what makes us effective and keeps us on the frontlines.

Aaron Yates is the clear choice for Second Amendment advocates