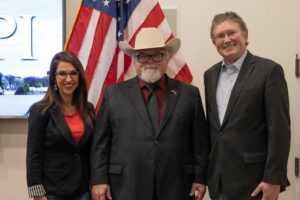 We are happy to report that the hero of Sutherland Springs, Texas, is now one of the many spokesmen for Gun Owners of America.

In 2017, Stephen Willeford used his AR-15 to seriously injure a mass shooter who took multiple lives in a church.

Willeford called the gunman out of the church and then shot him six times. This eventually led to the killer taking his own life.

Since then, Stephen has told his story countless times, explaining that he would never have been able to stop the bad guy that day without his AR-15.

Now, thanks to the support of GOA members, Stephen serves as GOA’s Grassroots & Industry Liaison. As such, he will travel around the country to spread the pro-gun message.

Already, Stephen traveled to Capitol Hill in late March to speak before a packed room of representatives. Many of them had never heard of Willeford or knew his story, but they were all tremendously impressed.

Every congressional attendee that night also received a copy of Erich Pratt’s Firing Back: How to Counter Anti-Gun Propaganda and Become a Better 2A Activist. 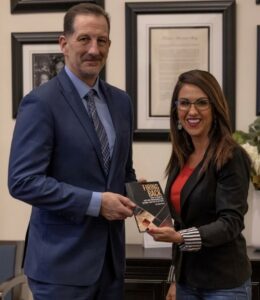 GOA’s Erich Pratt presents a copy of Firing Back to Rep. Lauren Boebert, who is one of the official endorsers of the book.

In addition to shooting down several anti-gun myths, the book gives gun rights activists the tools to defend our Second Amendment rights and shows how important firearms are to keeping a country free.

After reading the entire book, one Congressman told Pratt: “Outstanding job on writing a book that describes the very actions needed to protect our God-given right. We should purchase every Democrat a book for their Christmas stocking.”

Wouldn’t that be fun!

Gun owners can order their own personal copy of Firing Back by going here.

GOA Urges SCOTUS to Weigh in Against California Magazine Ban 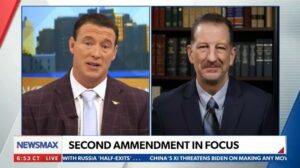 Thanks to the generous support of our members, Gun Owners of America (GOA) and Gun Owners Foundation (GOF) filed an amicus curiae brief this month, urging the U.S. Supreme Court to hear the case involving California’s magazine ban.

“Unless anti-gun radicals like Gavin Newsom and Rob Bonta are held accountable for their blatant violations of the Second Amendment, we can expect anti-gunners in other states to enact the same kind of gun control,” said a GOA statement that was released to the press.

In 2021, the 9th Circuit upheld California’s ban on high-capacity magazines, despite the policy’s clear Constitutional violations. This is the third amicus curiae brief filed by GOF in this case which was brought by the California Rifle and Pistol Association.

Aside from the clear Constitutional arguments, there is evidence that banning high-capacity magazines do nothing to prevent criminals from committing crimes.

You can see the full text of GOA’s brief here. You can watch the Newsmax video pictured above by either clicking on the graphic or going here.

And you can read BearingArms’ article on GOA’s involvement here.

The loud slap you just heard was not Will Smith popping Chris Rock again. Oh no, that was Florida’s Governor smacking the legislature for its failure to pass a number of bills.

Gov. Ron DeSantis, the nation’s favorite governor at the moment, recently called on the legislature to bring up Constitutional Carry among other items:

This is great news, to be sure. But what’s even better is that GOA members are getting praised for making Constitutional Carry such a popular issue that it could no longer remain in the shadows.

“This couldn’t have happened without the hard work you guys [GOA] have put in,” Rep. Sabatini said. “You guys made it an issue they can’t ignore.”

We want to thank our national audience. Our grassroots activists from coast-to-coast responded to our repeated email alerts and contacted Gov. DeSantis by the thousands.

GOA in the News: