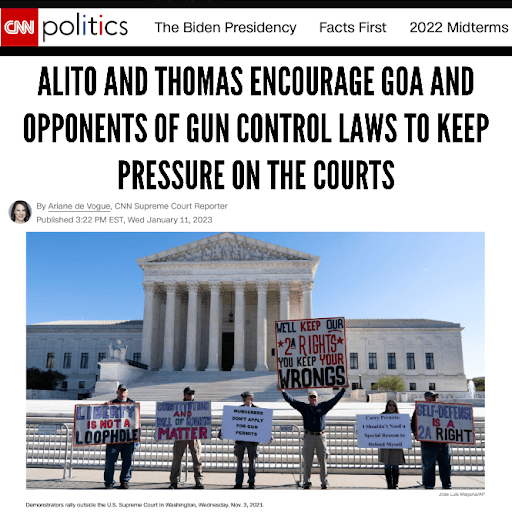 GOA and its foundation (GOF) filed an emergency request with the U.S. Supreme Court late last month, asking the Justices to compel the lower courts to follow the Bruen decision.

Yesterday, the Supreme Court spoke in regard to our case!

And while the Court did not grant our emergency appeal, Justices Thomas and Alito made an incredible statement scolding the Second Circuit for issuing a stay order without giving a reason, and for not expediting consideration of the appeal.

In fact, the Justices explicitly told GOA and GOF that we “should NOT be deterred by today’s order,” and that we should continue pressing our case if the courts are too slow or issue a bad decision.

Plus, this is key: Thomas and Alito said that our case has exposed “novel and serious questions under both the First and the Second Amendments.”

Of course, this draws out our expensive legal battle even longer. But Gun Owners Foundation is committed to staying in this fight until the bitter end – especially now that we’ve received words of encouragement from Justices Thomas and Alito.

Their words have sent shockwaves to anti-gun leaders around the country. Even CNN regrettably reported that Alito and Thomas have encouraged gun control opponents like Gun Owners “to keep pressure on the courts.”

As always, YOUR support ensures that we can incur all the legal costs necessary to stay in this battle against the anti-gun lawyers who are hellbent on disarming the American people.

Please make a tax-deductible contribution to Gun Owners Foundation’s Legal Defense Fund to help us stay in our ongoing legal battle that may very likely end up in a Supreme Court showdown.

While Gun Owners Foundation believes this latest development is positive, we know that there is no cause to celebrate just yet…

Under current New York law, law-abiding citizens are being forced to hand over their social media records to the government just to APPLY to conceal carry a firearm.

Until that tyrannical law is ripped to shreds, Gun Owners Foundation will keep fighting to protect the Second Amendment rights of New Yorkers – and all Americans.

You see, if we lose this battle, every anti-gun politician in the nation is going to try and replicate this law in their own state. In fact, other states have already started copying New York’s law, which is why our case there is so incredibly important!

I often talk about the slippery slope of gun control laws, but this law – if upheld – would be a complete nosedive into a totalitarian dystopia.

The notion that the government could monitor your free speech online to decide whether or not you have the right to defend yourself is a slap in the face to every one of our Founding Fathers.

That’s why victory in this case is so critical to every single one of our liberties. Already, a federal judge in New Jersey used OUR CASE and the reasoning therein to strike down much of the state’s restrictions on concealed carry.

Our case could very well be the key to preserving concealed carry across the country. But it’s YOUR support that will help us secure that victory.

So please, make a tax-deductible contribution to Gun Owners Foundation’s Legal Defense Fund to help us stay in our ongoing legal battle that may very likely end up in a Supreme Court showdown.