The United Nations Arms Trade Treaty (ATT) was scheduled for approval in the UN last year, in July, but was suddenly pulled off the table because Barack Obama thought (correctly) that it would destroy his reelection prospects. Interestingly, in considering Obama’s honesty and motives, the treaty was resurrected within a day or so after the November election.

Given Obama’s record of expansively interpreting statutes — and even ignoring them — we have to assume that the ATT would be implemented in the broadest possible manner. And, because under cases interpreting Article I and the Supremacy Clause, a treaty has the force of law, no further congressional action would be necessary for the ATT gun bans and registration to be put into effect.

With this in mind, briefly, the ATT would:

– ban large categories of firearms, including semi-automatics and handguns;

– require microstamping and, through that requirement, effectively ban most guns and ammunition.

The administration’s primary means of political “cover” consists of items in the preamble that supposedly gives a nod to the existence of the Second Amendment. These items talk about “the sovereign right of any State to regulate and control conventional arms exclusively within its territory [emphasis added]” and “use of certain conventional arms for recreational, cultural, historical, and sporting activities…”

If anything, these statements, because of their omissions, make things worse than if they hadn’t been included at all. The gun control advocates crafting this treaty, for example, fail, in their finding, to acknowledge the legitimate use of firearms for self-defense. And they understand, but don’t admit, that they will argue that no firearms sales in America are “exclusively” within our territory, given the bleeding of arms across the border to Mexican drug cartels.

But even if the preamble were perfect, as a general rule preambles and findings are meaningless and do not have the force of law. True, a judge intent on reaching a particular outcome can draw from any source that suits his fancy. That said, findings and preambles which are not echoed in the binding language of the text are not worth the paper they’re written on.

A couple of preliminary observations:

Second, Article 1 states that one of the two objects of the treaty is to “[p]revent and eradicate the illicit trade in conventional arms… for the purpose of…[r]educing human suffering.”  (No exclusion is made for domestic sales and possession of firearms.)  In judging whether or not “illicit” sales are being used as a pretext for regulation of legal sales, note that we have spent all year fighting regulation of LEGAL firearms sales being pushed by an organization which styles itself as Mayors Against Illegal Guns.

Third, Article 5 states that “[e]ach State Party is encouraged to apply the provisions of this Treaty to the broadest range of conventional arms.” [Emphasis added]

Fourth, the United States, even if it withdraws from the treaty, may “not be discharged, by means of its withdrawal, from the obligations arising from this Treaty while it was a Party…” Hence, the United States could be barred from repealing its national gun registry.

Fifth, under Article 17, the treaty will be interpreted by a Conference of State Parties, and, under Article 20, after six years, can be amended by a three-fourths vote. Although the United States must accept the amendment to be bound, it appears that the acceptance can be accomplished by the unilateral action of the president.

Article 9, purporting to deal with “Transit or trans-shipment,” states: “Each State Party shall take appropriate measures to regulate, where necessary and feasible, the transit…under its jurisdiction of conventional arms…through its territory…”

Note that the breadth of the language of Article 9, which far exceeds its intended purpose: Transport of a gun from California to New York (or even from your home to your place of business) is transportation “through the territory of the United States” — and appears to be capable of being regulated in any way the Obama administration deems “appropriate.”

Article 9 imposes no limitations whatsoever on the types of regulations which can be imposed, including gun bans and microstamping requirements.

Furthermore, Article 14 provides, in its entirety:

“Each State Party shall take appropriate measures to enforce national laws AND REGULATIONS that implement the provisions of this treaty.”  [Emphasis added] 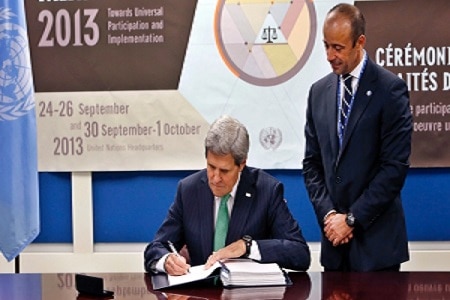 Article 5 states that “[e]ach State Party shall establish and maintain a national control list, in order to implement the provisions of this Treaty.” The term “national control list” is nowhere defined, which means that the Obama administration will define it. (Take into consideration the effort and political capital Obama has expended in order to establish a de facto gun registry by legislation.)

The article goes on to provide that “[e]ach State Party, pursuant to its national laws, shall provide its national control list to the Secretariat, which shall make it available to other State Parties.” [Emphasis added]

Finally, Article 5 states that “[e]ach State Party shall take measures necessary to implement the provisions of this Treaty and shall designate competent national authorities in order to have an effective and transparent national control system regulating the transfer of conventional arms…” [Emphasis added]

It is inconceivable that, in Obama’s eyes, an “effective national control system regulating the transfer of conventional arms” would not include a universal background check and national gun registry.

Article 11 requires each “State Party involved in the transfer of conventional arms,” which surely includes the United States, to “take measures to prevent their diversion.” Remember that, for the ostensible purpose of preventing arms from going to drug cartels in Mexico, Attorney General Eric Holder established an illegal system requiring the reporting of guns purchased in certain states.

At the beginning, I state some of the probable regulations which would be implemented by executive fiat pursuant to the ATT, if it were ratified by us.

These horror stories were chosen because these are some of the types of gun control that are being sought by Obama or are being imposed by some of the more anti-gun states.

But, in truth, there is no limit to the imposition of gun control which someone like Barack Obama could achieve, without legislative action, using this treaty as justification.