You Are Under Attack

You are Under Attack!

“Rest assured, if you refuse to take a stand against defunding the anti-gun ObamaCare law, then GOA will rename ObamaCare in your state as ‘______-Care,’ just put your name in the blank.” — GOA’s Larry Pratt and Tim Macy to US Senators (Sept. 24, 2013)
UPDATE: The phones are ringing off the hook in the U.S. Senate in opposition to funding ObamaCare as part of the Continuing Resolution.  Keep up the good work!
ATT Treaty to attack our rights: Today, Secretary of State John Kerry is expected to sign the UN Arms Trade Treaty (ATT).  Thankfully, GOA members have been receiving their latest GOA snail mail report on this treaty over the past week.
It is vitally important that you send the postcards which are included to your two U.S. Senators.  We need to dump thousands of postcards and letters on their desks so they know that the American people do NOT want this treaty ratified!
Please go here to start receiving GOA’s in-depth reports and newsletters if you are not already receiving them.
Anti-gun ObamaCare to threaten our rights: GOA yesterday told U.S. Senators that GOA will be rating the “cloture” (or filibuster) vote on ObamaCare.
You can click here to read the letter, which lays out many of the anti-gun problems with the ObamaCare law.
Senator Ted Cruz (R-TX) took to the Senate floor yesterday and spoke for several hours in opposition to the anti-gun ObamaCare law.  Several Republican Senators aided him, including Mike Lee of Utah, David Vitter of Louisiana and Rand Paul of Kentucky.  Citizens in these states should thank these Senators for standing strong! 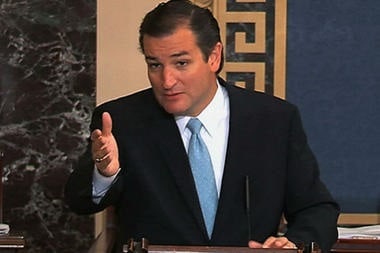 ACTION: Make sure you have called your Senators at 202-224-3121 and have urged them to support Cruz and Lee’s efforts to defund ObamaCare.  Likewise, ask your Senators to oppose any effort by Harry Reid to reinsert funding for ObamaCare into the Continuing Resolution.  The first vote of many may occur today.
If you like to speak “technaleeze,” you will want to ask your Senator to vote “NO” on cloture.  A YES vote on cloture is a vote to end debate and pass the Continuing Resolution the way Harry Reid wants it.  (That will allow him to reinsert funding for ObamaCare.)  So tell your Senators to vote NO on cloture.
ACTION for certain states: If you live in a state where your Senators are committed socialists — and who will vote for ObamaCare every chance they get — you might want to help buck up wavering Senators in other states.  So what follows is such a list.

Republican Senators whose position is unknown: