Please use GOA’s action center below to call your state senator and representative. We have also provided a sample script to make the call easier. (If you’re uncomfortable giving your phone number, please use your area code followed by 7 random digits.)

Not surprisingly, no one except Left-wing partisans bought into House Speaker Melissa Hortman’s radical anti-gun agenda. 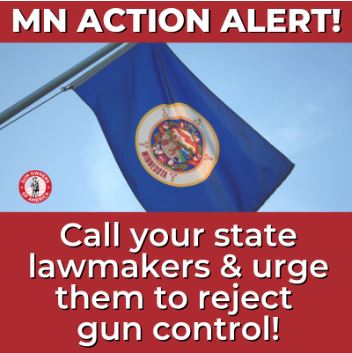 House File 9, as GOA has repeatedly warned about, would allow the police to strip a gun owner of his Second, Fourth, Fifth, and Fourteenth Amendment constitutional rights with no due process whatsoever.

Under Hortman’s proposal, all police would have to do is call a pliant judge and — presto!  Your constitutional rights vanish into thin air.

The first thing you learn of it is when a SWAT Team arrives at your home in the middle of the night — ready to ransack your home and, if you resist, to arrest or kill you.

In Maryland, a 60-year-old black man was shot to death by police serving a “red flag” order at 5:17 in the morning.

The other gun control Democrats are pushing is House File 8, a radical bill that will criminalize practically every private transfer of a firearm.

Incidentally, we’ll bet these are the very same Democrats who were crawling up the wall when Donald Trump wanted to use a “money bill” as a vehicle for funding for a wall.

But, since hypocrisy is pretty much the currency of politicians, Hortman had no problem with sticking Gun Confiscation/”red flag” legislation onto the public safety budget, thereby putting the safety of everyone in Minnesota as a hostage to Hortman’s ransom demands.

So please call your state senator and representative (above).  Tell them you oppose Speaker Melissa Hortman’s effort to hold public safety hostage to her repressive anti-gun demands.

Be sure to express your opposition to Gun Confiscation Orders and Universal Background Checks!