Is the Threat to America–You?

With apologies to Pogo, we have met the enemy, and he is—you. 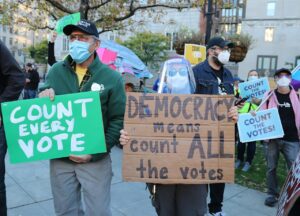 Yes, it turns out you are the greatest threat facing America. Who knew?

In the wake of the Jan. 6 Capitol incursion, Democrats, their media lapdogs, and infuriatingly even some of America’s national security personnel have worked tirelessly to shift blame away from the truly violent nutjobs seeking to harm our brave police, Members of Congress, and even Republican then-Vice President Mike Pence.

Instead, the American Left is determined to blame honest gun owners, along with everyone concerned about Orwellian COVID-19 lockdowns, the integrity of the 2020 election, or the plague of riots across the country for the last year that cost 47 American lives.

On Jan. 27, 2021, for instance, the new Biden Department of Homeland Security (DHS) issued a dire nationwide warning that “ideologically-motivated violent extremists with objections to the exercise of governmental authority and the presidential transition, as well as other perceived grievances fueled by false narratives, could continue to mobilize to incite or commit violence.”

False narratives, apparently, includes questioning whether the mass mail-in voting Democrats imposed—while blowing up election integrity laws based on crazed COVID claims—could possibly have had anything to do with the widespread voting irregularities they seemed designed to enable.

Granted, Biden’s DHS tries to appear even-handed by saying that your issues have included, “anger over COVID-19 restrictions, the 2020 election results, and police use of force”—even though the number of riots based on those issues in the last 12 months is 0, 1, and 633 and counting.

Biden’s DHS claims you “plotted and on occasion carried out attacks against government facilities,” without noting that in Portland, such attacks continued for weeks and even months with the vocal support of Democrats, while the single—though horrifying—attack on the Capitol had Republicans including President Trump denouncing it while it was going on. In Portland, Antifa and Black Lives Matter rioters have caused $2.3 million in damage just to federal buildings, including the Mark O. Hatfield Federal Courthouse, according to Oregon’s U.S. Attorney. Yet the Democratic District Attorney unilaterally refused to charge virtually all of the first 550 people arrested in Portland to “create a forum” for “peaceful protestors” to express their “collective grief, anger and frustration.” Nice.

Now, just in case there might be any confusion, Biden’s DHS singles out the Capitol riot, saying “some DVEs may be emboldened by the January 6, 2021 breach of the U.S. Capitol Building in Washington, D.C. to target elected officials and government facilities,” a threat yet to materialize.

Comically, the alert has an exact duration: It expires on April 30, 2021 at 1 pm. Unless, of course, DHS decides to put out a new one. Watch your Ps and Qs!

The truth is that Americans of goodwill should try to minimize the number responsible for violent events, left, right or crazy. That is, the proper law enforcement personnel should find those who broke into our Capitol, arrest any who committed specific crimes, try them and mete out the appropriate punishment under the law. And we should do exactly the same for whoever is convicted of killing retired St. Louis police Capt. David Dorn on June 2 of last year in a George Floyd-inspired riot, holding all accountable for breaking our laws equally.

Finally, we should call out the attempt to make you—along with the 74 million Americans who supported Donald J. Trump—the enemy.

We have met the enemy, and it is those trying to divide—and conquer—America.

Read more at the The Epoch Times