GOA Files SCOTUS Brief in Case Involving 2A & 4A Rights

The Bill of Rights establishes express limitations on government power in areas where the Framers knew from history that governments were prone to invade the pre-existing, God-given rights of their citizens.

At Gun Owners of America and our Foundation, our main focus always has been the Second Amendment, but we have filed literally dozens of briefs defending Fourth Amendment rights as well.  The reason is obvious. If the government can break into your house, search it, and then seize your property, your gun rights are put at extreme risk. 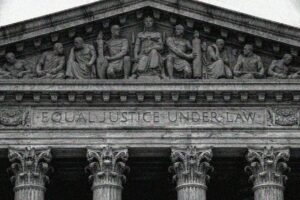 GOA and GOF addresses this issue again in a recent amicus brief before the Supreme Court in the case of Caniglia v Strom.

One of the legal gimmicks invented by judges to empower the police to violate your Fourth Amendment rights is called the “community caretaking exception.” This rule was created 48 years ago by the Supreme Court in a decision called Cady v. Dombrowski, 413 U.S. 433 (1973).

In that case, after an accident, the police arranged for a car to be towed from a public street to protect the public when the driver was comatose. Since the driver was an off-duty police officer required to have his handgun with him, and the handgun was not found with him in the car, the police searched for it in the trunk to prevent it from being stolen.

The Supreme Court will decide whether the police can use the Cady case to justify a warrantless search of a home for guns, and seizure of guns, ammunition, and magazines.

In the trunk the police found evidence of a crime committed by the comatose police officer. The Supreme Court upheld the warrantless search of the trunk and seizure of the evidence in it.

The rule of the Cady case has become known as the “community caretaking exception,” because the police were not investigating a crime at the time they found evidence of a crime, but rather were seeking to protect the public from a gun being stolen from a car that they had ordered towed.

The car was not in a police lot, but the police had exercised custody and control over the car. The driver was in no shape to move his car, and the police’s control of the car might justify its warrantless search for the gun. But once the camel’s nose is under the tent, it is usually hard to keep the rest of the camel out.

In subsequent cases, the lower courts have often ignored the fact that Cady was grounded in the police having exercised custody and control over the property of the car, and developed the theory that it applied more generally to vehicle searches, supposedly on the theory that cars can be driven away before warrants can be obtained by police.

That expansion of Cady was bad enough, but now, in the Caniglia v. Strom case, U.S. Supreme Court No. 20-157, the Supreme Court will decide whether the police can use the Cady case to justify a warrantless search of a home for guns, and seizure of guns, ammunition, and magazines, because one of the owners of the house might be upset.

The facts of the Caniglia case are important. Mr. Caniglia grew weary of arguing with his wife, and in a grand gesture, took an unloaded handgun, put it down on a table, and said something like — “Shoot me now and get it over with.” There are lots of other facts in the case, but basically the wife stayed elsewhere for the night, could not reach her husband by phone in the morning, and called the police for a “wellness check.”

The two police officers disagreed as to whether Mr. Caniglia was still upset that morning, but he was convinced to go to the hospital to get checked out.  He agreed to go only after being promised by the police that they would not take his guns. That was a lie, as the officers seized his handgun during the short time between when he left the house and when he returned from the hospital.

The police also lied to the wife, telling her that her husband had consented to the handgun being seized. Lastly, after hearing there was another gun in the house, the police searched their house and seized that handgun as well. As the First Circuit explained in their decision approving police actions, “deception is a well-established and acceptable tool of law enforcement.”

The right of the people to be secure in their persons, houses, papers, and effects, against unreasonable searches and seizures, shall not be violated, and no warrants shall issue, but upon probable cause, supported by oath or affirmation, and particularly describing the place to be searched, and the persons or things to be seized.

There is no “community caretaking exception” to be found in the Fourth Amendment. It doesn’t say that the right does not apply if the police are there to help you, rather than to investigate you. But “the right of the people to be secure in their … houses” is there — as clear as can be.

The GOA/GOF amicus brief in Caniglia explained how for decades the U.S. Supreme Court has undermined the “property basis of the Fourth Amendment.” Many times the Supreme Court stated that the “touchstone” of the constitutionality of a search and seizure was whether it seems “reasonable” — to a modern judge. In other cases, the Supreme Court said that searches and seizures were permissible unless they violated the so-called “reasonable expectation of privacy.”

Building on the property principle, our brief strongly urged the Court to confine the Cady case to narrow situations where the police exercised custody and control over a vehicle — which did not occur here. And our brief urged the Court to reject the Court’s oft-stated rule that the Fourth Amendment is “all about reasonableness.” No, it’s not!

As Justice Scalia explained, it’s all about protecting property rights. That’s why it protects “persons, houses, papers, and effects.”  (And, by the way, if you think that “persons” doesn’t fit in that list as property, take a look at Blackstone’s Commentaries where he explained that each person had a property interest in his own person.)

When courts give more power to the state, they take it away from us. And since they don’t want to explain their decisions in those terms, they find some “legalese” to cover the corruption of the Constitution.

In this case, they invoke the so-called “community caretaking exception.” A search for the scope of that doctrine is impossible to conduct, as the term has no independent meaning. It is elastic, and can be used to cover whatever the courts want it to mean. But Americans must not be fooled into thinking that these courts are interpreting the Constitution. Rather, these courts take away our rights by basing their decisions on earlier Supreme Court cases and call it constitutional law.

Think about the consequence of losing this case. It would mean yet another erosion of the ancient English notion that “a man’s home is his castle” which undergirded the Fourth Amendment. It would allow police to conduct warrantless searches of your home and seizures of your firearms on the flimsiest of excuses.

All the police would need to say was that they were there for your own good — not to investigate a crime, and they could take away the means by which you protect your own home. To guard against such judicial undermining of our Constitutional Rights, Americans must fully understand and not be fooled by the legal-sounding gimmicks used by “lawyers wearing black robes on the government payroll.”

Gun Confiscation is back! — You can help to stop it!