Permitless gun-carry came closer than ever to becoming Pennsylvania law in 2021.

It passed the Pennsylvania House and Senate and was a veto from outgoing Governor Tom Wolf (D.) away from established policy. While it ultimately fell short, the 2021 effort was a high-water mark for the proposal that has been floating around the statehouse for about a decade….

So, how did gun-rights activists get the policy all the way to the governor’s desk on the eve of an election year in a swing state?… 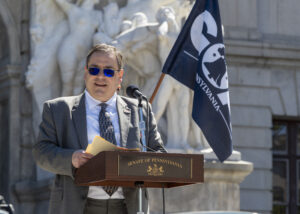 “GOA under Val did a fantastic job putting together a unified front for the GOP and even peel off a few Democrats as well,” he said. “So, the grassroots effort that he had across the state here was really impressive.”

Mastriano, who recently entered the primary race for governor after gaining a sizable following by becoming a prominent backer of former President Donald Trump’s (R.) claims a massive conspiracy stole the 2020 election, said he would push for the bill to become law if he becomes governor. He also said he hadn’t even heard from the NRA about the bill last year.

“I’ve got nothing against them; I just didn’t hear anything,” he said.

Doug Zubeck, a Republican staffer who has long served in the statehouse, agreed with the assessment. He most recently served Senator Mastriano until the senator was stripped of his staff by fellow Republican and Senate President Pro Tempore Jake Corman over Mastriano’s attempts to gain control of voting machines and other records as part of Trump’s efforts to overturn the election. He said GOA had become the leading force in state gun politics.

“The National Rifle Association, God bless them for what they’ve done, but the Gun Owners of America has taken it over in Pennsylvania,” Zubeck told The Reload. “That’s my humble opinion.”

He credited Finnell’s presence and persistence with GOA’s increased influence.

“I’m at work at 7:30 am, and we’d see Val coming across the main capitol building in the plaza walking in,” Zubeck said. “And then we look at each other like ‘wonder who he’s going to visit today.’ He wasn’t taking no for an answer.”

The debate over who deserves more credit for the bill’s passage is layered on top of an age-old debate over what lobbying tactics are most effective.

Finnell argued that while his presence in Harrisburg is meaningful, the group’s efforts to engage their supporters directly are a big reason he was effective. He said GOA sent more than a dozen email campaigns on the permitless carry effort and generated more than 29,000 messages from supporters to lawmakers while also partnering with Yong Americans for Liberty to do door knocking in critical districts. He described the GOA’s approach to lobbying as more grassroots-focused and confrontational than the NRA, which has long used its own massive grassroots reach to influence legislation.

“GOA is grassroots and constituent-driven,” he said. “Other organizations like the NRA, and some state groups, approach politics more as an access-based thing. They go, and they make friends with the politicians and what happens over time is there’s a drift.”

He said lobbyists are often taught to make friends with politicians in order to better influence them. But, he argued that approach can backfire.

But what Finnell described as “access-based” lobbying, [House Judiciary Committee Chairman Rob] Kauffman described as “quiet diplomacy.” He said the NRA was instrumental in turning key votes using a softer touch. He said the NRA specifically focused on meeting with Republicans in southeastern Pennsylvania, a swing area, to convince them to get on board with permitless carry.

“I know a couple of them who sat down with the NRA, had real conversations, and ended up voting for it,” Kauffman said. “They wanted to widen the playing field rather than beat on folks who were already their allies. It was very effective.”

He said he has a friendly relationship with Finnell in addition to the NRA but noticed he “was maybe not using the same tact as the NRA.”…

“Legislators love to put your bill in. ‘Oh, yea. We’ll put the bill in. We’ll get co-sponsors. Oh yeah.’ Then they do nothing,” Finnell said. “But as soon as you start pushing, ask them to do something, ‘Oh, no, no, no.’ I mean, then all the excuses start happening. ‘It’s not the right time. We might lose our majority. We’ve got members in southeast Pennsylvania who may not want to vote on this bill because of their districts.’ You start pushing, then they get the excuses. So, every step you double down, and you keep pushing it. You don’t take no for an answer and, eventually, get it through.”

Mastriano described the argument GOA hurt rather than helped the permitless carry effort as a case of sour grapes.

“It doesn’t surprise me because by forcing people to do what they were elected to do, I mean, it’s too bad if feelings got hurt,” he said. “Sorry, not sorry.”

Finnell argued the bill’s passage was evidence he was right to confront Republicans, and the GOA style works better than the alternatives.

“They were used to the NRA and the FOAC way of doing things which is access base, and you let the politicians tell you what’s acceptable, and then when a new paradigm comes in, people don’t just they can’t get used to it,” he said. “But look, we’ve achieved results this year, all of a sudden.”

[Editor’s Note: The above text here represents the portions of this article which apply to GOA’s role in lobbying for Constitutional Carry in Pennsylvania. The full article can be read here.]