Every year, Gun Owners of America staff invites family and friends to come out and celebrate the right to bear arms on the anniversary of the landmark District of Columbia v. Heller Supreme Court decision. The celebration involves shooting various guns at a private range a couple of outside Washington, D.C. 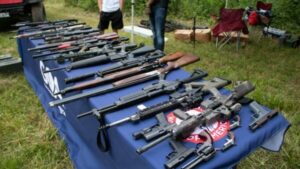 Plenty of firearms were brought out for the range day celebration! IMG John Crump

Most Constitutional legal scholars consider The Heller decision the most significant Second Amendment ruling in U.S. Supreme Court history. It was the first court case at the Supreme Court level that affirmed what American gun owners already knew. The right to bear arms is an individual right.

Before the Heller decision, some on the anti-gun side claimed that the right to bear arms only extended to a state-run militia and didn’t include individual American citizens. However, most on the pro-freedom side of the argument see this point of view by anti-gun legal scholars as intellectually dishonest. Even now-Vice President, Kamala Harris, wrote an amicus brief in the case claiming that the right to bear arms only extends to a state-run militia. 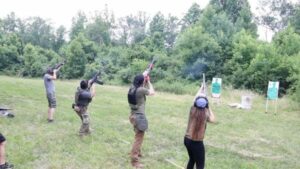 A little skeet shooting is always in order, even if you only have a Saiga-12 shotgun. IMG John Crump

At the heart of the Heller case was the question of if the D.C. government had the power to ban residents from owning handguns. Dick Heller claimed that the firearm ban violated his natural and constitutionally protected rights by telling him he could not own a handgun. On June 26, 2008, five Justices voted in favor of Heller. Four Justices voted for the City of D.C. GOA employees started referring to the anniversary of the decision as “Heller Day.”

The day started with a “show and tell” of everyone’s firearms. There were about 50 guns, from shotguns to modern sporting rifles to pistols. Some of the pistols included ones based on the AR-15 and the AK platforms equipped with pistol stabilizing braces. Another type of pistols displayed were those built from Polymer80 and JSD Supply unfinished frames.

The Biden administration has targeted both unfinished receivers and pistol-stabilizing braces in executive actions. The President ordered the Bureau of Alcohol, Tobacco, Firearms and Explosives (ATF) to change the definition of a firearm to include unfinished frames. The ATF has submitted new regulations for a public comment period.

The ATF also has submitted rules for public comment that would see almost all pistol stabilizing devices become stocks overnight. That would mean the ATF would consider most guns equipped with these braces as short-barreled rifles (SBR) and would be subject to the National Firearms Act (NFA).

GOA has committed to fighting against the changes via the comment period. If the new regulations can’t be defeated in the comment period, the gun-rights group has vowed to sue and spare no expense to defeat any anti-gun law. 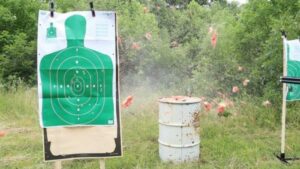 It wouldn’t be a celebration if a watermelon didn’t get blown up! IMG John Crump

Gun Owners of America sees the government using new regulations to ban certain items as a way for the Biden Administration to enact Unconstitutional gun laws without having to go through Congress. GOA has successfully prevented bad gun laws from making it through Congress and is fighting hard to prevent David Chipman from getting confirmed as the new ATF Director.

David Chipman is the most anti-gun ATF Director nominee in the history of the Country. Chipman worked as an anti-gun lobbyist for groups such as Giffords and Everytown. GOA is committed to fighting against anti-gun nominees. 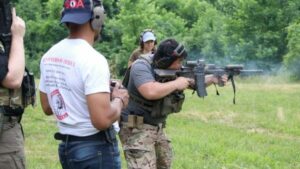 In addition to target shooting, the event consisted of shooting clays, soda bottles, and watermelons. The best part about the event is the intern who goes by “Policy,” stating he couldn’t believe he was getting to shoot guns in a gas mask and body armor for an internship.

The day was filled with lots of guns, lots of shooting, and most of all, a fellowship of gun owners.