“Gun Salesperson of the Year” Award Goes to The Democrats

If the Democrat encouraged riots have taught us one thing, it’s that there is no such thing as “gun-violence.” There is however an over-abundance of “human-violence.” The politically driven human-violence that we have seen in Seattle, Minneapolis, New York City and others continued for almost 2 months in Portland, Oregon with a significantly reduced level of mainstream media coverage. The difference between Portland and the other Democrat run cities across the country that experienced violence, property damage and bloodshed, is that the Portland violence occurred while the narrative was no longer useful to the left. 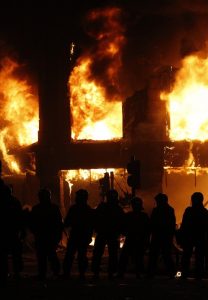 Why would the media refuse to air the vast majority of violence in the streets of Portland? There are a couple of reasons. The first being the fact that, although the violence was initially propagandized to imply that President Trump lead a country out of control, the focus started being put on the Democrat Mayors and Governors running those parts of our country. As soon as average American citizens began to question the motives of Democrat Mayors, the media shifted gears.

Sorry Democrats, it’s too late. The world sees your lack of leadership and fundamental hatred toward law and order. You gave yourselves away when Portland Mayor Ted Wheeler decided to join in the violence being perpetrated on his own city.

The second reason for hiding the severity of the Portland violence, is due to the increase in gun sales. As gun sales doubled from the same time last year with 40% of those purchasers being first timers, Democrats realized that the violence in the streets is only building support for the Second Amendment, and creating a fear of living in Democrat run cities. When left-wing funded, violent rioters announce to live news teams that they will be coming to the suburbs next, you can bet that the average voter (Republican and Democrat alike) will be taking another look at the benefits of gun-ownership.

Meanwhile, the anti-self-defense group Moms Demand Action, tried desperately to re-frame the radical left human-violence into a gun thing. Here is a quote from their website during this tumultuous time.

While America starts to recognize the level of danger Democrats are creating for their citizens and Moms Demand Action desperately pushes their false narrative, the only violence and property destruction that was deterred was by the McCloskey’s from St. Louis who were able to defend themselves and their home with… wait for it… guns. But we can’t have that, so St. Louis city circuit attorney, Kim Gardner prosecuted them for defending themselves.

“I am alarmed at the events that occurred over the weekend, where peaceful protestors were met by guns and violent assault,” Gardner said.

We’ve all seen the video by now and know that the violence was perpetrated by the mob that stormed the McCloskey’s property and threatened their lives. Here’s what our petulant group of anti-gun hags had to say when Missouri Governor decided he could not allow the injustice against the McCloskeys to continue and promised to pardon them.

“Gov. Parson’s comments directly condone threatening acts of violence towards Black Missourians, and all those exercising their constitutional rights to protest,” ~ Karen Rogers, volunteer with the Missouri chapter of Moms Demand Action.

When gun-lies just won’t bring the results these gun-grabbing freedom-haters want, they use “racism.” Are you surprised? The problem they are having by using black Americans as a tool to push for gun-control and racial divide, is the same problem they have when using violence to garner support for gun-control. Logical thinking people see the hypocrisy and recognize that the left-wing solutions are actually the problem.

Violence, hatred and destruction of private property is a hard sell, but it’s all the Democrats have.