Justice Sonia Sotomayor gave gun rights advocates and libertarians a reason to rejoice on Tuesday morning when the most liberal member of the Supreme Court handed down her opinion in Collins v. Virginia, a modest but important case that sits at the intersection of property rights and personal privacy.

[Go here to see the amicus brief by Gun Owners of America and Gun Owners Foundation.]

Collins wasn’t close; the court ruled 8–1 that cops generally need a warrant to search a vehicle in your driveway, a lopsided victory for champions of the Fourth Amendment…. 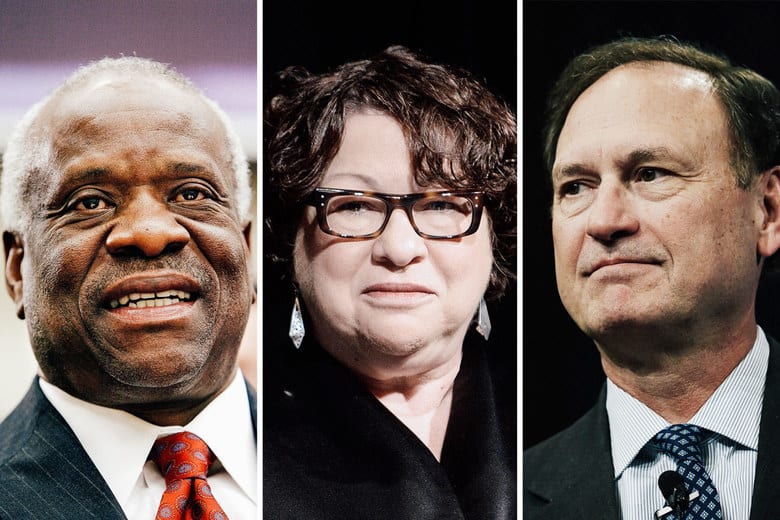 Ryan Collins, the defendant in Tuesday’s case, was not a very competent criminal. Collins illegally purchased a stolen motorcycle and parked it at the house of his girlfriend and child, where he often spent the night. He then uploaded pictures of the house to Facebook with the motorcycle in view. Officer David Rhodes saw the pictures, visited the house, and observed a motorcycle-like object at the top of a driveway, covered by a tarp. Without a warrant, he walked up the driveway, lifted the tarp, and checked the vehicle identification number, confirming that the bike was stolen. When Collins arrived home, Rhodes confronted him about the motorcycle, and Collins acknowledged it was his. Rhodes promptly arrested him for receiving property he knew to be stolen….

Does the automobile exception really apply when a cop has to cross onto an individual’s private property and futz with his personal effects to find the evidence he’s looking for?
Absolutely not, Sotomayor held. The Supreme Court has held that areas like Collins’ driveway are part of a house’s “curtilage,” the area connected to and “intimately linked to the home, both physically and psychologically.” Because “privacy expectations are most heightened” in the home, the police usually need a warrant, based on probable cause, to search the area. Even a relatively minor search, like the one Rhodes conducted, triggers this warrant requirement so long as the officer “physically intrudes on the curtilage to gather evidence.” That’s precisely what Rhodes did here, so his search cannot possibly fall under the automobile exception. Collins thus gives us a new bright-line rule of constitutional law: Outside of an emergency situation, the cops need a warrant to search your driveway….

Sotomayor’s opinion, and her emphatic rejection of Alito’s arguments, will bring a sigh of relief to advocacy groups that support the rights to private property and gun ownership…. Gun Owners of America, the Gun Owners Foundation, and the Heller Foundation all signed onto an amicus brief as well….

Gun rights groups worry that, if the court sanctioned Rhodes’ conduct here, it would erode the “sanctity” of the home, undermining not just individual privacy but also the right to self-defense. Gun owners, after all, want to protect their homes and families, using lethal force against intruders if necessary. If the police can trespass on their property with impunity, the concept of unlawful intrusion gets blurry: A cop, acting on a hunch, can do what a private citizen cannot, and a homeowner may not easily distinguish between the two as he assesses a potential threat.

Equally worrisome is the possibility that police might trawl a homeowner’s carport for any indication of gun ownership, then use the evidence to justify a warrantless search for illegal firearms. Cops already use lawful firearm possession to infringe on Fourth Amendment rights; gun rights groups fretted that a bad decision in Collins could further undermine gun owners’ rights to be protected from unreasonable searches.