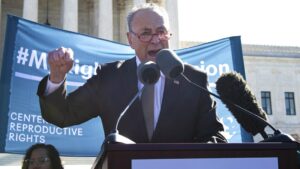 Saul Alinsky may have written his Rules for Radicals to give leftists an advantage in the battle for America’s soul, but that doesn’t mean that the rules aren’t tactically wise.  On Friday, Gun Owners of America (GOA) decided to put into play several of those rules when it asked [if] Sen. Chuck Schumer [would be] “red-flagged” as a potentially dangerous person.

GOA’s request focuses on the fact that, on Wednesday, while speaking to protesters at a Planned Parenthood rally outside of the Supreme Court, Schumer sent a direct message to Justices Gorsuch and Kavanaugh:

Schumer claimed that the words weren’t a threat and that he never intended them to be.  Speaking on the Senate floor, he explained that they were just the way Brooklyners talk, and, in any event, it was all the Republicans’ fault that anyone got upset:

Of course, I didn’t intend to suggest anything other than political and public opinion consequences for the Supreme Court, and it is a gross distortion to imply otherwise. I’m from Brooklyn. We speak in strong language. I shouldn’t have used the words I did, but in no way was I making a threat. I never, never would do such a thing, and Leader McConnell knows that. And Republicans who were busy manufacturing outrage over these comments know that, too.

Maybe people in Brooklyn do speak that way, but Chief Justice Roberts made it clear that he did not understand the words to be mere tough-guy rhetoric.  Instead, he took the unusual step of issuing a sharp reprimand against “threatening statements” that are “dangerous”:

Justices know that criticism comes with the territory, but threatening statements of this sort from the highest levels of government are not only inappropriate, they are dangerous. All Members of the Court will continue to do their job, without fear or favor, from whatever quarter.

Empty apologies and toothless reprimands were not enough for the fine people at GOA.  Instead, consciously or not, they remembered a few key Rules for Radicals:

With that in mind, on Friday, GOA sent a letter to New York governor Andrew Cuomo asking [if he’ll enforce] New York’s newly enacted “Red Flag” law.  That law, as Cuomo’s website states, “prevents individuals who show signs of being a threat to themselves or others from purchasing or possessing any kind of firearm.”

The letter repeats Schumer’s speech and Chief Justice Roberts’s description of it as “threatening” and “dangerous.”  GOA notes that one of the statutory factors for issuing a red flag order is “a threat … directed toward … another person” (2019 NY CPLR §6342).

Moreover, it turns out that federal law also makes illegal Schumer’s conduct.  Thus, GOA informs Cuomo that 40 USC §6134 makes it unlawful to “make a harangue or oration, or utter loud, threatening, or abusive language in the Supreme Court Building or grounds.”  Schumer made his speech on Supreme Court grounds.

You can and should read the whole letter here.  You will enjoy it.  In addition to the letter, GOA filled out an Application for a Temporary Extreme Risk Protection Order, which you can see here.

This is New York State’s opportunity to prove that the law in New York applies both to rich and poor, powerful and weak.  Will anyone be surprised if New York fails this test?

[Ed. Note:  GOA’s letter points out that, “GOA opposed the enactment of this [red flag] law, and opposes the enactment of such laws in other states, in part because of our anticipated selective enforcement of this law, applying it to the poor and minorities, while giving a pass to the rich, powerful and politically connected.  Your response to this letter will help demonstrate whether our concerns were valid.”]