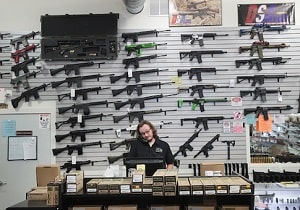 Despite any concerns it has with the Fix NICS Act, GOA encouraged members of Congress to vote for the combined bill in hopes that the package had a better chance of passing the Senate.

… Meanwhile an alert from Erich Pratt, executive director of Gun Owners of America (GOA), claimed Fix NICS “would require that the rolls of Social Security, Medicare, Medicaid, CHIP, and ObamaCare be trolled for recipients with PTSD, ADHD, or Alzheimer’s—that is, people who have had guardians appointed,” the group’s legislative council said it was not arguing the bill would create new categories of prohibited people. Instead, he said, the bill’s attempt to gather all of the records required under current law, which dates back nearly a decade, is the problem.

“No, we are not arguing that ‘Fix NICS’ adds new categories,” Michael Hammond, general counsel for GOA, told the Free Beacon. “But we are arguing that 18 U.S.C. 922(g), as interpreted by the 2007 NICS Improvement Amendments Act and its regulations at 27 CFR 478.11, is so potentially broad, that, if every eligible name were submitted to NICS, as the bill proposes, the result would be the submission of a large number of names of otherwise law-abiding Americans.”

[Gun Owners of America did not advocate for final passage of the House bill and has encouraged the Senate to pass a stand-alone reciprocity bill, which does not contain a Traffic Ticket Gun Ban.]