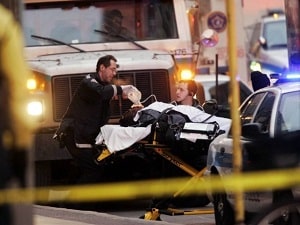 At least 45 people were shot and seven killed over the Labor Day weekend in gun-controlled Chicago.

Breitbart News reported that five people were shot during one four-hour time period on Sunday morning. And the Chicago Tribune reports that there was a five-hour window of violence on Monday in which 15-year-old boy and two other individuals were shot and killed. Nine others were shot and wounded during those same five hours.

Violent outbreaks have been commonplace in Chicago this year. Breitbart News reported at least 63 were shot and eight killed on the weekend of August 18-20 alone. Moreover, the Tribune reported that over half of those shooting incidents occurred within “13 hours from Saturday to early Sunday.”

Texas Sheriff to Looters: Try it and ‘You Could Leave This County in a Bag’