Gun advocates seek ‘friend’ to take over Fish and Game 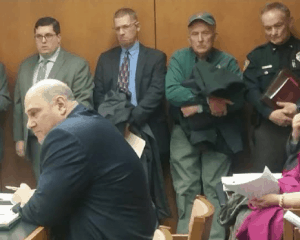 Gun Owners of America State Director Alan Rice has often clashed with Fish and Game officials. Here he testifies at a legislative hearing against the agency while Col. Kevin Jordan, right, listens in.

They maintain that Normandeau, the second-longest-serving administrator in the agency’s history, opposed every attempt to relax gun regulations. They say those efforts included repealing the law requiring a permit to carry a concealed gun, and unsuccessful bills to eliminate the need for a license for pistols or allow riders to carry guns on snowmobiles.

“The anti-gun activism is coming from the top. New Hampshire Fish and Game needs a strong leader who respects and reveres the Constitution and doesn’t break faith with the taxpayers of New Hampshire who fund the department with state tax dollars,” Burt said. “The department needs to stop advocating for gun control since the department receives close to $500,000 per year of federal gun tax monies.”

For nearly 90 years, Fish and Game has received Pittman-Robertson Act dollars from a 10% federal tax on handguns and an 11% tax on shotguns and ammunition.

Rep. Mark Proulx, R-Manchester, is still angry that the agency opposed his bill several years ago to end the prohibition against motorists carrying loaded guns in cars and trucks.

“Normandeau has pushed against the Second Amendment across the board. It boggles my mind how you have someone against firearms running Fish and Game. It is time for a change,” Proulx said…

Two studies out this week offer compelling insights into guns in New Hampshire and complicate the politics surrounding them. While the state ranks in the top 10 per capita in gun ownership, it is one of the nation’s least violent states, including having the lowest gun-involved murder rate.

“This state is more pro-gun than ever,” said Mike Hammond, general counsel to GOA-NH and a former congressional candidate from Dunbarton.

“I think people who think it’s good politics to run a lot of anti-gun legislation up the flagpole in Concord have been fooling themselves. Gun owners here have been fat, dumb and happy and not worried about anyone taking their guns,” Hammond said…

VIDEO: Anti-Gun Director of NH Fish and Game is on His Way Out