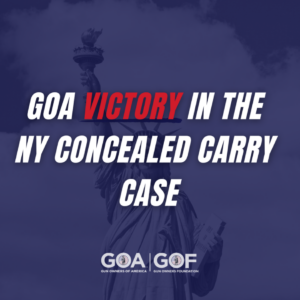 As they did with regard to a Temporary Restraining Order, the State Defendants have requested that any Preliminary Injunction that is issued by the Court be (1) either limited in scope to Plaintiffs or the Northern District of New York, and (2) stayed for three business days pending appeal.  (Dkt. No. 48, at 115-16.)

After carefully considering the matter, the Court denies this request for the reasons stated by Plaintiffs in their reply papers and during oral argument, and for the reasons stated recently by U.S. District Judge John L. Sinatra in Hardaway v. Nigrelli.   (Dkt. No. 69, at 54 [Plfs.’ Reply Memo. of Law]; Dkt. No. 71, at 107-08 [Prelim. Inj. Tr.].)  See also Hardaway v. Nigerelli, 22-CV-0771, 2022 WL 16646220, at *18-19 (W.D.N.Y. Nov. 3, 2022).  To those reasons, the Court adds the fact that five of the nine Defendants in this action have not even opposed Plaintiffs’ motion to preliminarily enjoin the below-enjoined provisions of this patently unconstitutional law. See, supra, Part I of this Decision.  Although the Court has not considered that de facto consent in evaluating the merits of Plaintiffs’ claims,140 the Court does find it relevant in evaluating any possible injury to the public that would be caused by this Preliminary Injunction if, on appeal, this Court’s Decision were to be held to be in error.

For all of these reasons, the Court denies the State Defendants’ request for a limitation and stay.

ORDERED that Defendant Hochul is DISMISSED from this action as a party; and it is further

ORDERED that Plaintiffs’ motion for a Preliminary Injunction (Dkt. No. 6) is GRANTED in part and DENIED in part in accordance with this Decision; and it is further

ORDERED that Defendants, as well as their officers, agents, servants, employees, and attorneys (and any other persons who are in active concert or participation with them) are PRELIMINARILY ENJOINED from enforcing the following provisions of the Concealed Carry Improvement Act, 2022 N.Y. Sess. Laws ch. 371 (“CCIA”):

(1) the following provisions contained in Section 1 of the CCIA:

(c) the provision requiring “a list of former and current social media accounts of the applicant from the past three years”; and

(2) the following “sensitive locations” provision contained in Section 4 of the CCIA:

(a) “any location providing . . . behavioral health, or chemical dependance care or services” (except to places to which the public or a substantial group of persons have not been granted access) as contained in Paragraph “2(b)”;

(b) “any place of worship or religious observation” as contained in Paragraph “2(c)”;

(d) “airports” to the extent the license holder is complying with federal regulations, and “buses” as contained in Paragraph “2(n)”;

(e) “any establishment issued a license for on-premise consumption pursuant to article four, four-A, five, or six of the alcoholic beverage control law where alcohol is consumed” as contained in Paragraph “2(o)”;

(f) “theaters,” “conference centers,” and “banquet halls” as contained in Paragraph “2(p)”; and

(g) “any gathering of individuals to collectively express their constitutional rights to protest or assemble” as contained in Paragraph “2(s)”; and

(3) the “restricted locations” provision contained in Section 5 of theCCIA; and it is further

ORDERED that Plaintiffs are EXCUSED from giving security; and it is further

ORDERED that the State Defendants’ request for a limitation in the scope of this Preliminary Injunction and for a stay of it pending appeal (Dkt. No. 48, at 115-16) is DENIED.

FL Patriot Arrested for Exercising 1A Right to Protect 2A Rights