Gun-rights groups and firearms manufacturers decried a rule proposed by the Bureau of Alcohol, Tobacco, Firearms and Explosives (ATF) at the request of President Joe Biden that would deem most firearms with stabilizing pistol braces illegal, saying that millions of lawfully abiding gun owners would be affected. 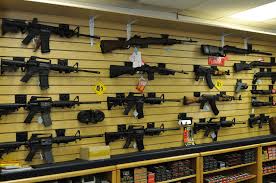 “It will be the largest gun registration, destruction, and confiscation scheme in American history,” Alex Bosco, who invented the stabilizing brace, told The Reload website of the rule unveiled on Monday.

And Aidan Johnston, the director of federal affairs of gun-rights group Gun Owners of America, wrote that the proposal is a “gross abuse of executive authority.”

“Millions of otherwise law-abiding gun owners now will be forced to destroy, register, or surrender their lawfully acquired pistol-braced firearms,” he wrote on Twitter.

Johnston, furthermore, asserted that his group will attempt to “defeat these unlawful regulations during the comment period or, failing that, through legal action.”

The ATF’s proposed rule would define a handgun as a short-barreled rifle if it is equipped with a stabilizing pistol brace, which, according to the ATF’s own estimate, is a popular accessory.

Between 3 million and 7 million braces that are already owned by Americans, the ATF noted, and approximately 1.9 million would be impacted by the rule. Meanwhile, the Congressional Research Service, a public policy research institute used by Congress, has estimated (pdf) that between 10 million and 40 million stabilizing braces are owned by American civilians as of April 2021.

The new proposed rule would also make most guns equipped with a stabilizing brace illegal under the National Firearms Act, and it would require firearms owners to forfeit, disassemble, or register their weapons—otherwise, they could potentially be charged with a felony.

“When individuals use accessories to convert pistols into short-barreled rifles, they must comply with the heightened regulations on those dangerous and easily concealable weapons,” the Department of Justice on Monday about the rules. The DOJ also argued that the braces allow people to easily “convert pistols into these more dangerous weapons” without going through a background check or meeting other requirements.

The proposed rule fulfills an executive order issued by President Biden in early April that directed the DOJ to propose a number of rule changes, including the braces and classifying unfinished gun parts as completed guns.

Biden said in April that recent mass shootings were part of “an epidemic” and “has to stop.”

At the time, a number of gun-rights and industry groups such as the National Rifle Association and Firearms Regulatory Accountability Coalition panned the executive order. Gun-control groups including Everytown for Gun Safety praised the move.