After the Tree of Life shooting in Pittsburgh in 2019, the city passed gun control measures violating the Pennsylvania state Constitution.

The three illegal gun control ordinances were struck down by the Court of Common Pleas and on appeal to the Commonwealth Court. Even though the ordinances were struck down, the violation of the state Constitution was so grave in the eyes of a group of four city residents that they decided to band together and file a criminal complaint against the Pittsburgh City Council and Mayor Bill Peduto with the help of Gun Owners of America (GOA). The group claimed the Mayor and the City Council violated Title 18, Section 5301, and committed an act of “official oppression” when they passed the illegal gun control measures. 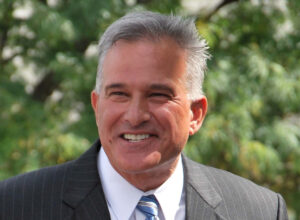 The four Pittsburgh residents sued for a Writ of Mandamus demanding that District Attorney Zappala follow the law by accepting the complaint and evaluate it on its merits. A Writ of Mandamus is an order from a court to a government official ordering that person to properly fulfill their official duties or correct an abuse of discretion. In this case, that would mean Mr. Zappala must comply with Rule 506.

The Court of Common Pleas dismissed the case leading the four plaintiffs and GOA to appeal to the Commonwealth Court of Pennsylvania. A panel of judges from the Commonwealth Court disagreed with the Court of Common Pleas’ dismissal and ordered District Attorney Zappala to accept and evaluate the criminal complaint. This victory doesn’t mean that Zappala must bring charges against the Mayor and the City Council, but he must give a decision on the matter.

By forcing the DA to give an official decision on the criminal complaint, it opens options for the four residents and GOA if they disagree with Zappala’s decision. The plaintiffs could then sue in the Court of Common Pleas, forcing the state to criminally prosecute the Mayor and the City Council. Most legal analysts think this will be the next stop for the plaintiffs and GOA.

Gun Owners of America celebrated the victory while calling for strengthening preemption laws. The gun-rights group would like to see civil and criminal penalties for local government officials who violate the law. The civil penalties would include damages paid to the plaintiffs by the local government officials for violating their Constitutional rights. GOA would also like to see plaintiffs be able to recuperate legal fees from the officials.

Today, gun owners in Pittsburgh have been vindicated,” said Dr. Val Finnell, Pennsylvania Director for Gun Owners of America. “DA Zappala was clearly in the wrong by refusing to accept and review the private criminal complaint. Now, I would hope that DA Zappala finally does his job and holds former Mayor Bill Peduto and the Pittsburgh City Council accountable by filing criminal charges against these individuals for committing acts of official oppression by violating the constitutional rights of their citizens and ignoring the state firearms preemption law,” continued Finnell. 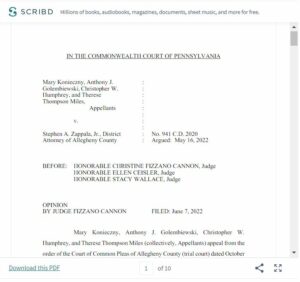 DE: Fight Back Against the Many Proposed Anti-Gun Bills