“The Gun Owners of America … has sent at least two email blasts this week to would-be donors, accusing Cornyn of ‘quietly making a deal with the rabid anti-gunner, Chris Murphy, to pass universal background checks.’” 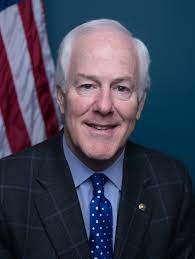 Cornyn and Murphy, D-Conn., declared Wednesday they had hit an impasse and had abandoned talks that began about two months ago….

Cornyn is a former member of the Senate Republican leadership, and an NRA-backed gun rights advocate. He authored a law that improves data collection for the system used to prevent criminals and people with a history of domestic violence or serious mental illness from buying a gun illegally.

“He was always an important partner because getting John’s buy-in, we thought, was a way to get to 60” votes needed to overcome a filibuster, Murphy said, conceding that without Cornyn on board, that task will be much harder.

“If you brought a commercial background checks bill to the floor, it would have Republican votes. I just don’t know that it would have 10,” Murphy said. “So, we’re talking now with a handful of people including Lindsey Graham and Pat Toomey. Don’t know if we’ll get to the finish line but it’s good to have multiple potential partners.”

The Murphy-Cornyn talks were focused on a loophole that allows gun buyers to sidestep the background check system by purchasing from unlicensed dealers.

“That was a limited reform to begin with,” Murphy said, expressing frustration that even a goal he and other gun control advocates view as modest remains elusive.

In March, the House voted to require background checks on almost all gun purchases, closing loopholes that exclude sales at gun shows and by any unlicensed seller.

That bill has stalled in the Senate.

The end of the Cornyn-Murphy talks leaves the fate of any new background checks bill unclear….

The Gun Owners of America, which has looked down on the National Rifle Association as soft, has sent at least two email blasts this week to would-be donors, accusing Cornyn of “quietly making a deal with the rabid anti-gunner, Chris Murphy, to pass universal background checks.”

“If John Cornyn, who represents the state of TEXAS, is already considering stabbing gun owners in the back, then you know that we’re truly in a DIRE situation,” an email read.