The ranks of gun owners with approved concealed carry permits has swollen to 17 million, and new legislation offered in the Senate Thursday would make it easier for them to carry their weapons across state lines.

Bolstered by a larger pro-gun caucus in the Senate, Texas Republican Sen. John Cornyn is introducing his latest version of the Constitutional Concealed Carry Reciprocity Act. 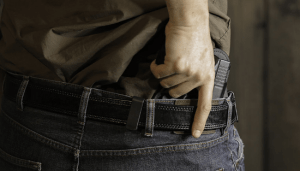 “This bill focuses on two of our country’s most fundamental constitutional protections — the Second Amendment’s right of citizens to keep and bear arms and the Tenth Amendment’s right of states to make laws best-suited for their residents,” said Cornyn, a top Senate GOP leader.

I look forward to working with my colleagues to advance this important legislation for law-abiding gun owners nationwide,” he added.

He already has 31 co-sponsors.

All states allow some form of concealed carry, though the rules are very different. What’s more even those who allow their citizens to carry pistols do not always allow non-residents to carry even if they have permits.

Cornyn’s plan would grant reciprocity while still keeping intact state prohibitions on those not allowed to have gun permits….

The legislation has a strong backer in Donald Trump Jr. and picked up strong Senate support last year. The new Democratic-controlled House, however, appears to be moving in a distinctively anti-gun direction….

Gun Owners of America added, “Sen. Cornyn’s bill would allow citizens to protect themselves and their families while traveling across the country — clarifying a confusing patchwork of state laws. An infamous case of such a mix-up was Shaneen Allen, a Pennsylvania concealed carrier who made a wrong turn into New Jersey and then was imprisoned for over a month simply for possessing a firearm that was lawful in her home state.”

He highlighted these points in his bill: