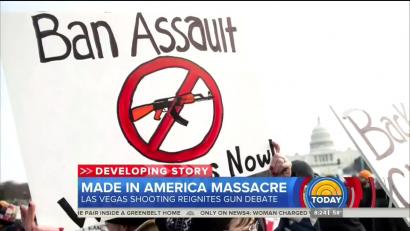 In the aftermath of the Las Vegas shooting massacre, the Big Three (ABC, CBS, NBC) networks wasted little time in exploiting the tragedy to advance their anti-gun rights agenda. In just six days (October 2 through October 8) of coverage, the networks filled their evening and morning show programs with statements favoring gun control over gun rights by a ratio of roughly 5 to 1.

MRC analysts reviewed all statements that took a position on overall gun policy by anchors, reporters, guests and soundbites, beginning with the morning of October 2 through the morning of October 8, and found time spent arguing in favor of more gun control (30 minutes, 17 seconds) overwhelmed time devoted to supporting gun rights (6 minutes and 27 seconds.)

Separate from the overall arguments on gun rights, the networks also devoted 28 minutes and 30 seconds to regulation of bump stocks (devices that allow semi-automatic guns to perform like fully-automatic guns) that would essentially put them in line with already existing laws about fully-automatic weapons. With the NRA and many Republican lawmakers signaling they would be open to looking at regulation of bump stocks, the thrust of the coverage favored some sort of restrictions. However 1 minute and 45 seconds was spent on those who opposed any new regulations, even those on bump stocks.

We’re winning the battle … for now