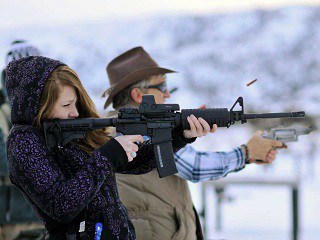 The AR-15 is the quintessential American rifle of the 21st century — the same as the Kentucky long rifle was to the American colonists, the Winchester repeating rifle was to those who struck out west, and the M-1 Garand was to this nation’s “Greatest Generation.”

An Oklahoma man uses his AR-15 to kill three armed intruders in his home. A very petite mother chases three burglars out of her home simply by charging her AR-15. A concealed carry holder, sitting on the front porch of his Houston home, grabs his AR-15 rifle to defend himself against a drive-by-shooting attack — killing two of the goons and hospitalizing the third.

Well, herein lies the controversy. Each defender employed a weapon that anti-gunners disparagingly, and inaccurately, refer to as an “assault weapon.” So if any of them had protected themselves in a state that bans these types of firearms and magazines, they would be in jail. And this is why Gun Owners of America (GOA) is challenging the Maryland ban on so-called “assault weapons” and has recently filed an amicus brief before the U.S. Supreme Court.

The GOA brief explains the many reasons why the ruling, issued by the Fourth Circuit Court of Appeals, totally misses the mark.

For starters, the activist judges ruled that certain commonly-owned firearms, such as the AR-15, are not protected by the Second Amendment.

But GOA’s brief before the U.S. Supreme Court rebuts this foolishness:

The AR-15 is the quintessential American rifle of the 21st century — the same as the Kentucky long rifle was to the American colonists, the Winchester repeating rifle was to those who struck out west, and the M-1 Garand was to this nation’s “Greatest Generation.”

The perverse rationale that desires to limit the number of rounds with which a homeowner can use to protect himself or herself is elitist — and makes people less safe.

Consider the Texas woman who used her revolver in defense of two attackers in her home. She fired all her rounds and severely wounded one intruder in the stomach. But she completely missed the second thug. When he heard the clicking sound, he turned and savagely beat her. The homeowner survived, but she has promised to buy a new gun.

Thankfully, she lives in a state where she can buy a handgun with a good-sized magazine. She needs it.

The anti-gun judges on the Fourth Circuit Court, however, treat firearms like the AR-15 as some kind of anachronism that would have been unheard of during the founding era. Perhaps they are unfamiliar with the Girandoni rifle, which Lewis and Clark took with them on their expedition through the Louisiana territory. This .46-caliber long gun could fire over 20 controlled shots from its tubular-fed “magazine.”

In other words, firearms that hold multiple rounds have been around for hundreds of years, but the liberal judges on the Fourth Circuit do not care about history or about facts. They routinely disregard instances where gun owners successfully defend themselves against multiple opponents via firearms that can fire multiple rounds.

Moreover, banning so-called “assault weapons” has nothing to do with lowering crime rates. Consider:

In 2015, Baltimore experienced its deadliest year in history, only two years after the state enacted a ban on commonly-owned firearms and magazines.

After Congress allowed the Clinton semi-auto ban to expire in 2004 — thus legalizing guns that were banned for ten years — the national murder rate actually DECLINED 18 percent in the following ten years.

So how exactly is gun control making us safer?

Erich Pratt is the executive director Gun Owners of America and a guest columnist for “Down Range with AWR Hawkins.”