Dress It Up However You Want, A Mandatory Buyback Is Confiscation 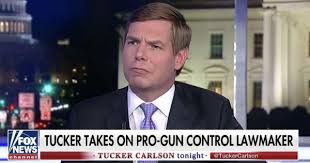 When a gun grabber starts talking about bans, most know they need to be careful. You can pass something like the Assault Weapon Ban of 1994 and be OK, but you don’t want to go much further. You definitely don’t want to tell Americans they can’t have guns they already purchased, that they have to turn them in. That’s a gun confiscation, and that’s never a lot of fun.

But they all don’t. Take anti-gun zealot Rep. Eric Swalwell.

You see, Swalwell is trying to use a bit of rhetorical slight-of-hand to hide his confiscation desires. This was on display when Tucker Carlson took him to town recently.

Townhall‘s Beth Baumann transcribed the takedown, and it pointed out just how disingenuous Swalwell is being. …

Swalwell: I’m not calling for a confiscation. What I’m saying is we should invest in buyback, that we should restrict any weapons that aren’t bought back to gun clubs, hunting clubs, shooting ranges. Keep them there, where it’s safe. Not on our streets. And if you were caught, just like you were caught, you know, with drugs, or anything else, or they have probable cause to go in your home and you have one of these weapons, yeah. You’d be prosecuted. I’ve never suggested sending troops out and collecting and confiscating–

Carlson: Okay, I’m going to quote an old friend of mine called Eric Swalwell. He’s a Congressman from California, on the intel committee—

Swalwell: If they’re caught with them, yeah.

Banks Tried to Curb Gun Sales. Now Republicans Are Trying to Stop Them