Written by Rachel Malone Published: 10 May 2019

Last night you helped us score not one but two victories for gun rights in Texas! 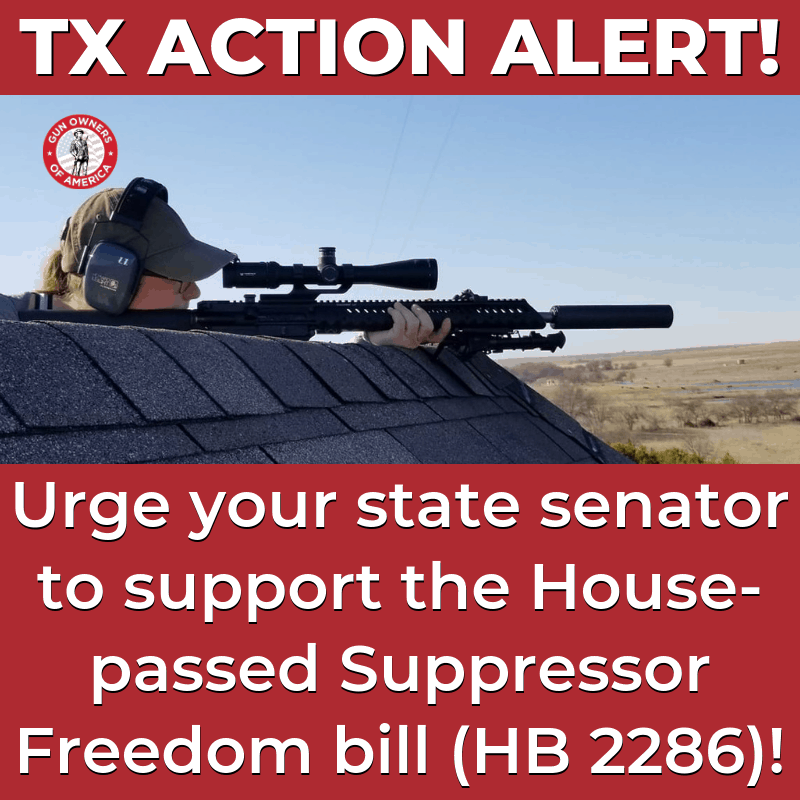 As the Texas House raced through yesterday’s agenda, it became clear that they were going to reach two important gun-related bills before their midnight deadline — one good, and one bad.

Thanks to all of your grassroots activism in reaching out to your legislators after my last email; we killed the bad bill AND passed the good bill with a supermajority!

Now I need your help to keep the good bill moving through the Senate. Use the widget above to be connected with your State Senator to ask them to fully support HB 2286, the Suppressor Freedom bill by Oliverson.

Gun Control (HB 545) Killed By Its Own Author

HB 545 by Nevarez is the closest thing to a red flag law that has been moving this session. It’s a terrible violation of due process. It purports to criminalize private sales of firearms to people deemed “mentally ill” — but some of the court processes in these “determinations” use very low standards of evidence and, in addition to containing other problems.

HB 545 died Thursday evening when its author, Rep. Nevarez, indicated on the House floor that he did not have the votes to pass it and moved to postpone consideration until 2021, effectively killing the bill.

Rep. Nevarez simply does not understand the basic concepts of due process and constitutional rights. He falsely represented our opposition, stating that “there seems to be a taboo on not letting the mentally insane purchase guns.”

Actually, Representative, there is a taboo on stripping away Constitutional, God-given rights without complete due process, including high standards of evidence!

Of course, anything can happen in the next few weeks. I’ll be watching to make sure this bad bill stays very dead and is not snuck back in through amendments to other legislation.

Only a couple hours after killing the gun control bill, we celebrated again when HB 2286 by Oliverson passed with a supermajority (101-33)! This “Suppressor Freedom” bill gets rid of the Texas penalties related to suppressors and says that Texas will not enforce Federal anti-suppressor regulations.

Although GOA is strongly committed to fighting to end the insidious NFA regulations, please note that this bill does not repeal Federal law or prevent Federal agents from enforcing their laws. But it is absolutely a great step forward for Texas to set our own state’s policy and refuse to enforce bad Federal law. It’s also a strong sign that Texans do not agree with the NFA regulations on suppressors and moves us closer to repealing the NFA’s gun control regulations on a federal level.

See more about HB 2286 on my video or on this factsheet.

After the House has its final passage vote of HB 2286 (called the 3rd reading), it will be sent to the Senate. We need to move quickly to push the bill all the way through the Senate so it can pass into law!

Please reach out to your Senator today!

Use the widget above to be connected with your State Senator. You’ll talk with a staff member or intern. Tell them that you are a constituent and you’d like for your Senator to fully support HB 2286. You can also make a find your State Senator’s phone number here.

Offer to send them the factsheet and video link above if they’d like more info.

Along with these two victories, I’m also happy to let you know that another gun rights bill is moving forward: Constitutional Carry for Disasters (HB 1177).

This bill was passed in the House three weeks ago, and is now scheduled for a Senate hearing this coming Monday, May 13. If possible, please attend and register your opinion YES for HB 1177.

Although the bill applies only to evacuations form declared disaster areas for a limited amount of time, it is a positive step to recognize the ability of everyday Texans (even in this narrow circumstance) to carry their handguns without a license.

Senate Committee on State Affairs
Senate Chamber (2nd floor, East wing)
Monday, May 13
Start time: 9am
They’ll break around 11 to hear bills on the floor; this can be short or take many hours. After they finish, they’ll pick up where they left off.
See the hearing notice here.

To recap, here are the bills that I’ve discussed:

Again, please don’t forget to use the widget above to urge your State Senator in support of HB 2286, the Suppressor Freedom bill, and then please follow up your email with a call (you can find your state senator’s number here. The session ends on May 27 and time is short — don’t delay!

And thank you for helping us score these victories for liberty in the great state of Texas. I’m counting on you to keep us moving forward!